Have you ever been trying to automate something at home or at work? Here it comes for the rescue Raspberry Pi along with Docker! With these tools, you can create a lot of projects of small effort and low cost.

What is Raspberry Pi?

Raspberry Pi represents of a small computer. It has all the basic hardware components like memory, processor, etc. and extensions like USB, Wi-FI, sound controller. Components of this device depend on the model that you are using.Due to its small size, availability and low price it is a very popular device that can perform everything you would expect from typical PC. For example, you can play videos, browse the internet, or even play some simple games. However, don’t expect the Raspberry Pi to be as good as the best PC on the market. It is decent computer with some limitations and it would have some issues loading complex websites or running more aggravating games, but still the possibilities of this device are very impressive. For example, with Raspberry Pi you can create:

and a lot more!

Docker is an open source project helping developers that helps to create, deploy, and run applications in a much simpler way by operating on so-called containers. They are lightweight execution environments that share operating system kernel. Except for sharing system kernel, containers are running in isolation with each other. Containers allow us to store libraries, dependencies, etc. in one place. By that, we can assume that the application will run on any other device without worries of possible customized settings of this particular machine.

How to run Docker on Raspberry Pi?

Installation Docker on Raspberry Pi is really fast and easy. Follow these steps:

This script will detect OS, install packages, and run Docker. This operation may take a while so you need to wait. In the end, the script will output all necessary information about Docker and how to use it. Additionally, if you want to run commands without prepending sudo (as a non-root user) you have to add the user name to the Docker group.

Note: $USER variable holds your username. It comes from the environment.

Now Docker is set up on Raspberry Pi and finally, you can do some cool stuff!

How to use Docker?

The basic concepts of Docker are images and containers. The first is made of filesystem layers that allow to execute applications. Images contain source code, dependencies, libraries, tools, or instructions for installing and running an application. Dockerfile image is just a binary file that is immutable for the user. The second one - containers are mutable beings that are using Docker images as templates. images and containers may be compared to classes and instances of this particular class in object-oriented programming. 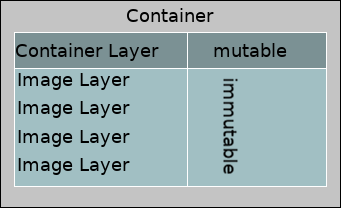 Docker images are available at a cloud-based registry service called Docker Hub. To search for an image (e.g. Debian), use the following commands:

To start, manage, remove, and stop a container you will always usedocker container command. At this example, we will run Debian from the previous code.

This container will stop after executing, it doesn’t have long-running processes. To simplify let’s say that there were two states:

Then exit process. To interact with the container you have to use flag -it.

To show all running Docker Containers use:

To show all containers use flag -a:

To delete container use (pass your container ID):

What are the advantages of using Docker with Raspberry Pi?

Docker is giving you the ability to deploy applications with its main dependencies without needing to reinstall the operating system or undoing a botched upgrade. These two things are very important for embedded applications and devices. They may need some redeployments which could brick a device. Docker on AMR (Advanced RISC Machine) brings hardware products closer to the SaaS (Software-as-a-Service) deployment. Continuous updates on the SaaS model are something very obvious and taken for granted. Docker also allows sending container differences to the device saving lots of bandwidth. This is another important thing for embedded devices which they can be often poorly connected. Another benefit of using Docker with Raspberry Pi is that you can run multiple capabilities in isolated containers. It is like an ecosystem of dockerfiles where each of them is adding new functionality to our device.

Docker is not like traditional infrastructure where applications are hosted on virtual machines or bare-metal servers. As a result, using containers is breaking some prior assumptions about visibility. Regular maintenance and proper configuration are highly recommended to organize servers and containers without any blind spots. There is a list of best practices about optimizing the Docker environment.

There are some interesting projects which can be done by anyone who has Raspberry Pi and some engineering skills. Every project has step by step guide so the entry threshold is very low.

The Yocto Project is an open-source collaboration project that helps developers build custom Linux-based systems despite the hardware architecture. The project gives a manageable set of tools and space. Embedded developers can share configurations, software stacks, technologies, and best practices that can be used to perform tailored Linux images for embedded and IoT devices, or anywhere a customized Linux OS is needed. As an open-source project, the Yocto Project works with a hierarchical governance structure based on meritocracy and managed by its chief architect. There you can read more about this project.

RPI build is an open-source project that 3mdeb have participated in. It is a tool to build, install and release Linux kernels for the Raspberry Pi platform. Check documentation here.

The IoT technology connects smart home devices like lights, locks, or security cameras but you have to control them by something. Often you can use just a phone to monitor and change states of these devices but if you use multiple products from different services they might not communicate well with each other. The hub is a center of your home automation system, it allows you to control them easily. Nowadays smart technology is a common feature using everywhere. If you are a person who wants to automate a lot of processes in your home there is an easy way to do it at a low cost using Raspberry Pi. There is a step by step guide written on Forbes magazine how to set up Raspberry Pi for a smart home hub.

An artificial intelligence assistant is a software agent which means that is a computer program acting for a user or other program in a relationship of agency. AI assistant is performing tasks for an individual based on questions or commands. Now you can create one using Raspberry Pi instead of buying expensive devices from big corporations like Google or Amazon. Google established cooperation with The MagPi, official Raspberry Pi magazine. This cooperation has provided addons that enable producers to add artificial intelligence and voice control to Raspberry Pi projects. There is an official documentation of Google Assistant on Raspberry Pi.

If you have some old TV without Smart technology you can connect it to the internet with all features with Raspberry Pi. Your new Smart TV will have new abilities like streaming Netflix, play media from USB storage, search the web through Google, or check news and weather. Buying a brand new TV is expensive, there is always a cheaper way if you have some skills as an engineer. However, don’t bother if you are a newbie to Raspberry Pi. There are a lot of information on the internet and instructions are mostly written clearly. There is a step by step guide how to create Smart TV from regular TV using Raspberry Pi and free software called Kodi.

There are many projects with openers on the button but we want to automate it a little bit more. In this project, Raspberry Pi will help us detect which car is standing in front of our garage door and then check if this particular car has permissions to access. Everything can be created easily with a simple camera and OpenALPR service of plate verification. There is a guide with all prerequisites.

Raspberry Pi is a very powerful, small, and cheap device. The number of projects is infinitely big and the only barrier is your imagination. There are a lot of add-ons, tools, and controllers which are working perfectly with Raspberry Pi. I think that every developer or engineer should interest in this subject and try to do some stuff on his own. The entry threshold is very low because of a large number of projects on the internet. You can find all the things you need to develop projects. If you are a newbie I would recommend you follow instructions on some projects of the previous list. There are also a lot of open-source projects of Raspberry Pi which can be very interesting. You can find them here. If you finish some projects you can try to extend one from the open-source list. 3mdeb is highly recommending open source software because working with these kinds of projects is strongly developing you to be a better engineer. The code is publicly accessible and modifiable which allows you to expand it for your purposes without any restrictions. If you are interested in an open-source you can check where we have contributed. 3mdeb open-source

Dawid Zębacki
Junior Web Engineer at 3mdeb - Embedded Systems Consulting. Passionate about web development and Javascript lover. He follows the motto: 'Choose a job you love, and you will never have to work a day in your life.'

How to build an Embedded Systems Consulting business?