During the QubesOS minisummit, I have presented the initial status of the fwupd/LVFS support for the Qubes OS. Now it is time to share some more information about the progress.

We have used the suggestions, that we got during the Qubes OS minisummit and we have rethought the whole architecture concept. We decided to create a wrapper, which will adapt fwupd to the Qubes OS requirements. There is no need to show all the connections in the one diagram. A more straightforward approach to the subject will be focusing on the functionalities one by one.

We have used following setup during the development process:

Required packages in the dom0 and the TemplateVM:

Differences in the fwupd version may cause problems in the future. I will write more about solving this issue in the development roadmap.

The refresh command downloads, verifies, and updates metadata in the dom0 and usbVM. Let’s take a look at the architecture diagram. 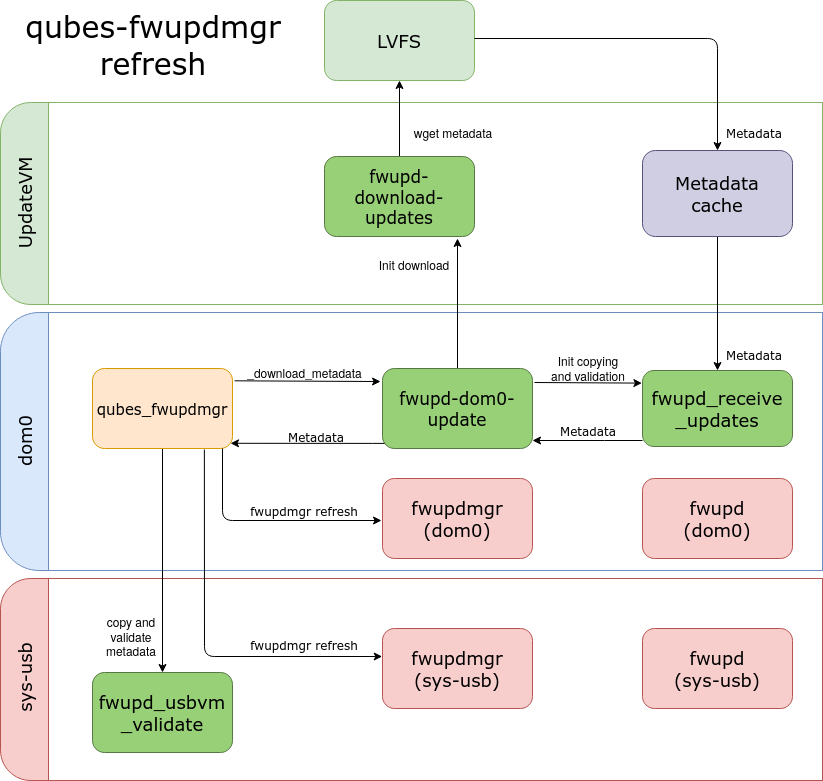 Everything starts in qubes_fwupdmgr. It is the main python script, where a user is communicating his needs. Downloading the metadata is initialized by the _download_metadata method. It calls subprocess, that runs fwupd-dom0-update with a --metadata argument.

fwupd-dom0-update is the bash script, that initializes the processes in UpdateVM. During the updating metadata, fwupd-dom0-update clears existing cache files. Afterward, it creates cache directories in updateVM with the corresponding ownerships. Then it calls the fwupd-download-updates.sh, that verifies and provides the metadata update files to UpdateVM. In the next step, fwupd-dom0-update runs a fwupd_receive_updates, that is responsible for checking signature. If everything is as expected it copies files to dom0.

In the end, the whole process comes back to qubes_fwupdmgr. The main script checks the usbVM flag. If it is true, it copies files to usbVM and runs fwupd_usbvm_validate. It validates metadata update files. If we have no error code to that point, qubes_fwupdmgr uses the fwupd client to refresh “manually” metadata.

The refresh process is presented in the following video. 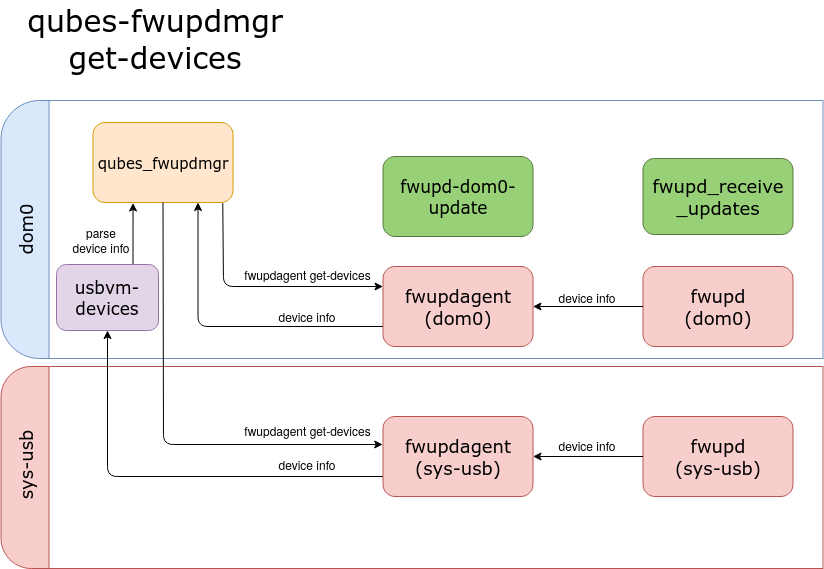 qubes_fwupdmgr calls a fwupdagent get-devices in the usbVM and dom0. The agent provides a JSON output that contains device information. The main script parses the output and shows the information in the structured form. 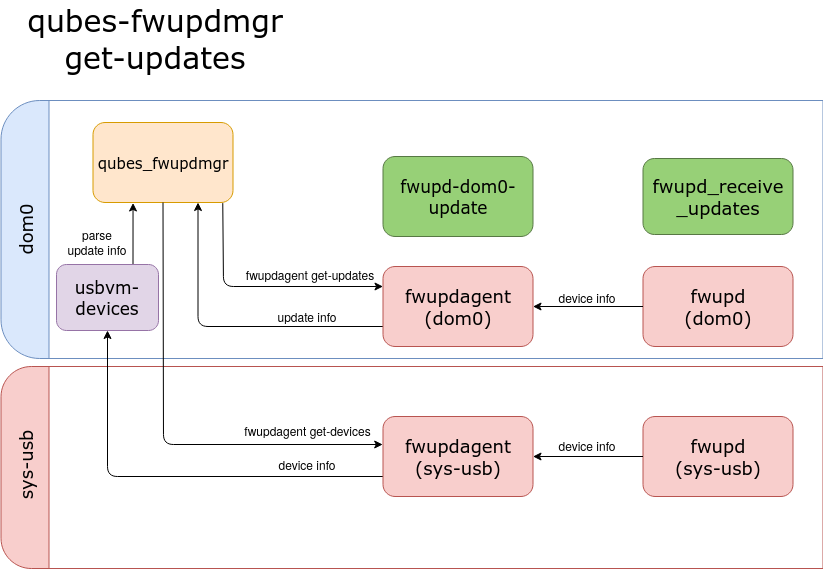 The main difference between get-updates and get-devices appears in the older version of the fwupdagent. 1.3.9 client version has dedicated command fwupdagent get-updates, which generates information about possible updates in the JSON form. 1.2.12 version has no such command. At first, we need to acquire devices information from fwupdagent get-devices. Updates details are obtained in the comparison of the current device version with versions in a release list.

During the update process, a user gets a list of devices with information about possible updates. The user chooses the device number, which will be updated to the newest version. Then the tool downloads, validates, and installs firmware update .cab archive. 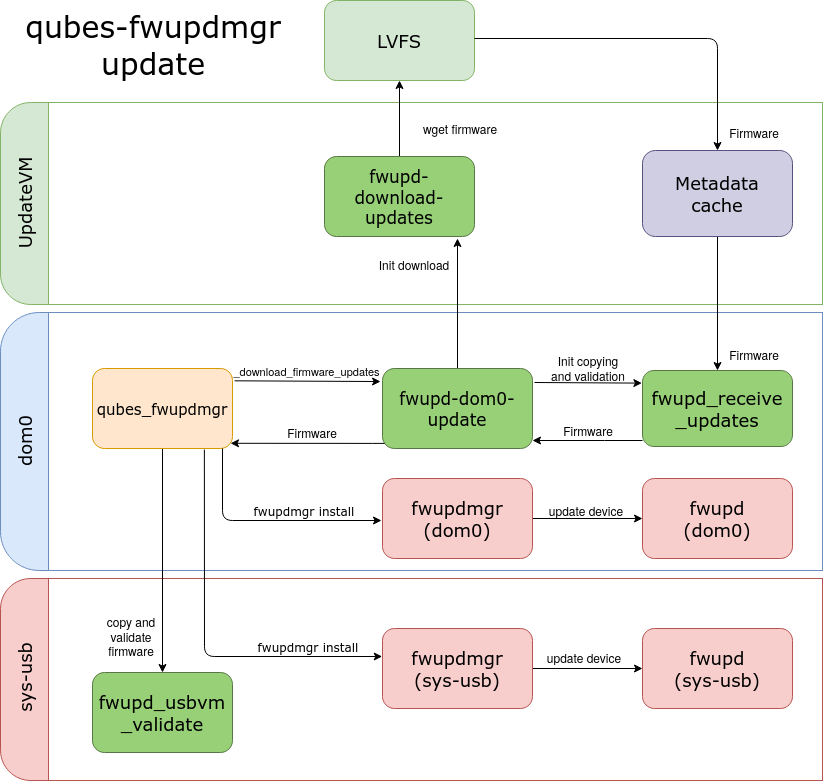 Downloading a firmware archive and the metadata updates vary in the verification process. fwupd-download-updates.sh checks the checksum of the archive in the updateVM. Then the fwupd_receive_updates copies the firmware to dom0 and it verifies the checksum once again. The script unpacks the archive and checks the signature of the firmware. Also during the system firmware update, qubes_fwupdmgr verifies DMI details with the information contained in firmware metadata. If the device is connected in usbVM, qubes_fwupdmgr copies the firmware file to sys-usb. The main script initializes fwupd_usbvm_validate, that verifies the firmware in usbVM before it will be installed.

The update process of the device connected in dom0 is shown below.

Here is the update process of the device connected in sys-usb.

The downgrade process is similar to updating. A user chooses the device number and the firmware version, that will be installed on the downgraded device. Then the tool downloads, validates, and installs firmware downgrade .cab archive. The firmware installation proceeds with --allow-older flag. 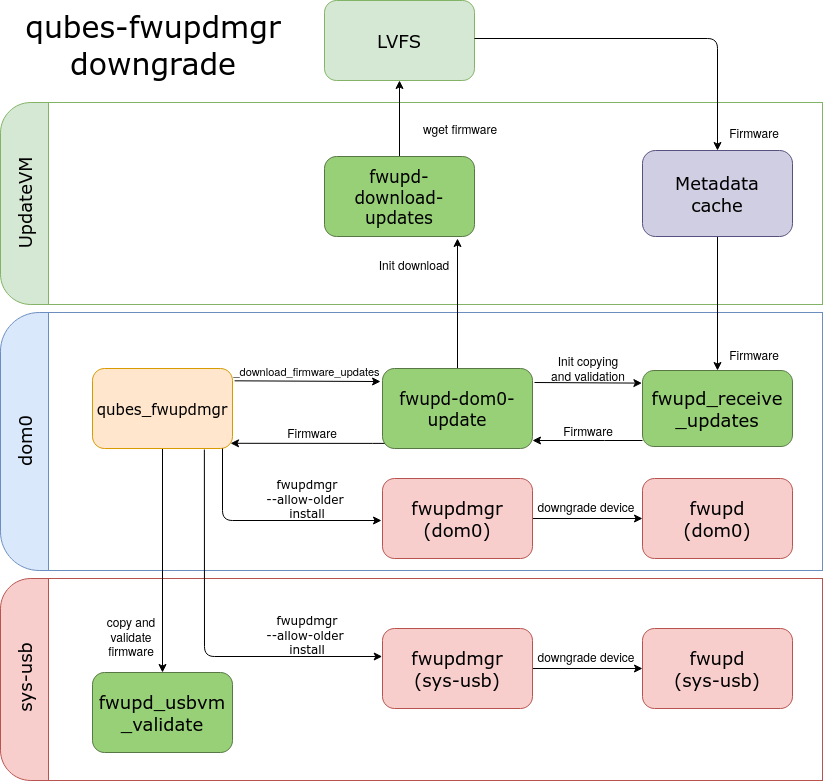 The downgrade process is presented in the following video.

The clean command removes cache directories from dom0 and updateVM.

The qubes_fwupdmgr.py is covered by python tests. They could be run on any OS. The unit tests and integration tests, that require Qubes OS or testing device will be skipped if the requirements aren’t met.

The main issue we are facing now is the difference between fwupd versions in dom0 and usbVM. The newer version of the tool has different binaries locations. Also, fwupdagent has more features (get-updates command). Therefore the next step of the development process will be replacing the static paths of fwupd with the dynamic ones, that will depend on the fwupd version. In addition, the get-updates command should properly obtain details of the update depending on the fwupd version. Soon we will add support for heads updates and UEFI capsule updates. As well we want to implement installation by the qubes-builder.

If you have any questions, suggestions, or ideas, feel free to share them in the comment section. If you want to hear more about the Qubes OS support for fwupd I encourage you to sign up to our newsletter.