In the first half of September, Invisible Things Lab with 3mdeb organized the next edition of the Qubes OS summit. In the last years, the 2020 and 2021 editions were remote. This year summit was a face-to-face event hosted in Berlin, which took place from the 9th to the 11th of September. It has been another productive event, during which we have exchanged loads of knowledge and expertise. 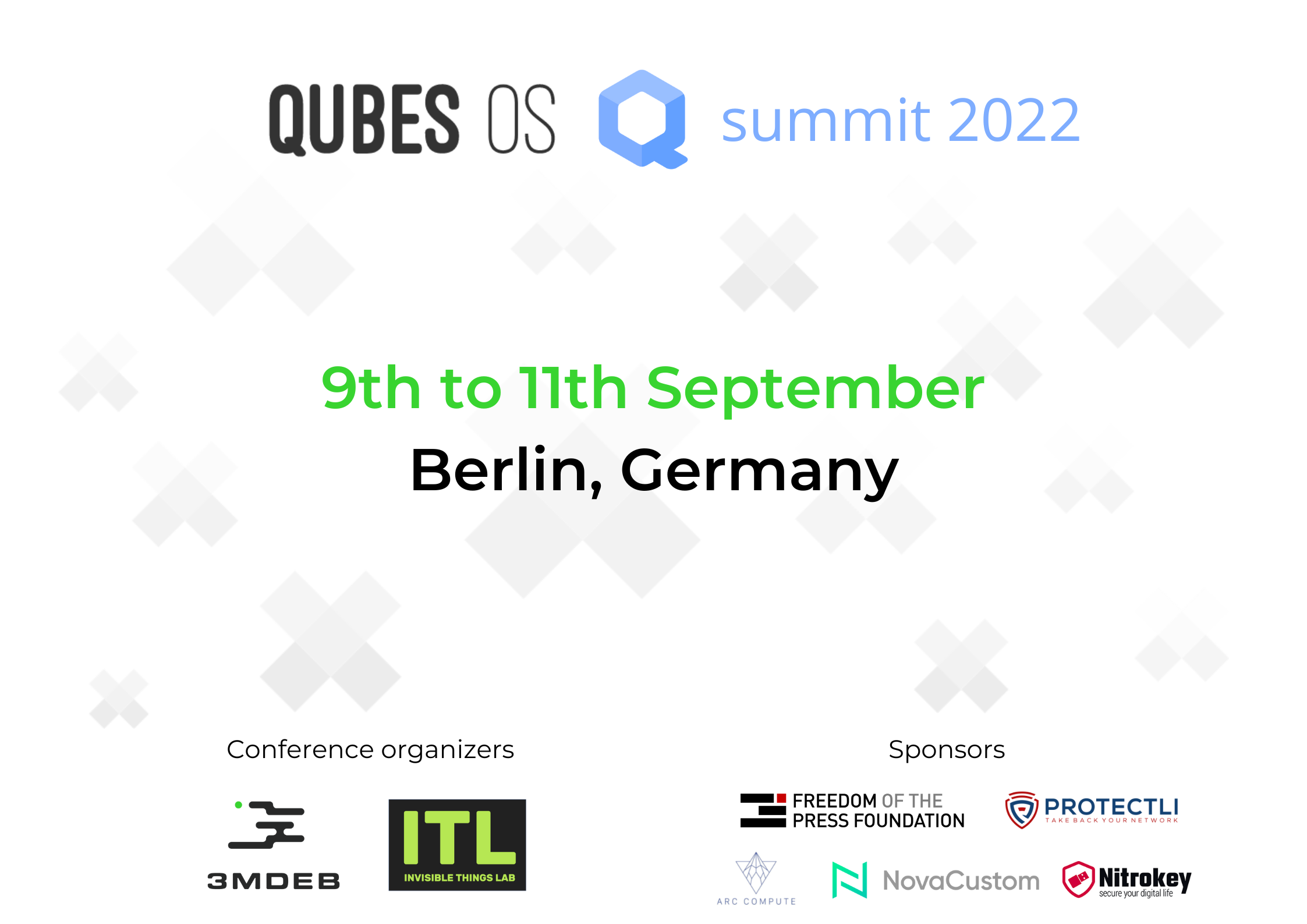 The first day started with the Welcome to Qubes OS summit 2022 presentation held by Piotr Król. Piotr said about Qubes OS Summit history and what changed since the last event.

The next presentation held by Marek Marczykowski-Górecki was a Qubes OS development status update. In this talk, Marek did a summary of the Qubes project. Also, he presented the current work of his team and a rough roadmap for Qubes OS 4.2.

The next presentation was Building secure applications with Qubes OS held by Michael Z. He presented SecureDrop Workstation which is a new and improved front-end for journalists using SecureDrop. It was built on top of Qubes OS and relies heavily on its features and security properties. In this talk, Michael introduced the system and discussed some lessons learned by treating Qubes OS as a framework for secure multi-VM applications.

After the short break Frédéric Pierret presented the Next generation of Qubes OS builder In this talk, Frédéric presented the second generation of the Qubes OS builder. This new builder leverages container or disposable qube isolation to perform every stage of the build and release process. From fetching sources to building them, everything is executed inside a “cage” (either a disposable or a container) with the help of what we call an “executor.” For every command that needs to perform an action on sources, like cloning and verifying Git repos, rendering a SPEC file, generating SRPM or Debian source packages, a new cage is used. Frédéric presented the global architecture and demonstrated how to use this new build system.

Jan Suhr presented the next interesting topic, which was Tailoring Qubes for Enterprises. Enterprises are usually a domain of Windows-only systems and users. Jan presented how Qubes could be tailored to meet the requirements of enterprises that rely on Windows but at the same time provide a “reasonable secure system based on Qubes. A key requirement is to achieve a system that is usable for users with ordinary Windows experience. Therefore the key is the integration of a Windows VM within Qubes OS.

After the lunch break, Marta Marczykowska-Górecka presented a new Qubes OS Policy: Adventures in UX/UI Design. Marta gave a brief overview of the current state of Qubes OS policy tools, the in-development graphical policy editor/configuration editor, the process of simplifying the complexities of policy configuration, and design and implementation challenges. As a continuation of last year’s redesign of the Application Menu, Marta has been working on making Qubes more accessible for non-expert users and on creating GUI tools for system configuration that would be friendlier and easier to use than existing tools. This time, Marta took on the challenge of creating a graphical editor for various policy files. In this talk, she covered the results of user research, the challenges encountered during design and implementation, and showed off the tools created as a result of this research.

The next presentation was GPU Virtual Machine (GVM) held by Arthur Rasmusson. GVM is a GPU Virtual Machine built by the OpenMdev Project for IOMMU-capable computers such as x86 and ARM. In this talk OpenMdev developers, Arthur Rasmusson and Michael Buchel gave an overview of GPU Virtual Machine (GVM) and how it works to allow virtual machine guests to run unmodified GPU drivers (non-paravirtual) on ordinary GPUs such as those in laptops, desktops, embedded devices, and servers. They also took some time to talk about ongoing efforts to improve support for devices and areas of collaboration where we might best provide support to QubesOS for integrating OpenMdev tools like GVM for enhanced GPU virtualization.

Puck Meerburg talked about Isolating GUIs with the power of Wayland She tried to answer the question if Qubes OS could replace its custom GUI isolation protocol with Wayland while staying as performant and secure. With the advent of Wayland, many strides have been made in the desktop Linux space, limiting the effects a malicious application can have. Gone are the days of every application being able to snoop on every keypress. This presentation dived into the differences between X and Wayland, and why it makes for a great fit in isolating operating systems like Qubes OS and Spectrum.

The next presentation was PipeWire and Qubes Video Companion held by Demi Marie Obenour. Her talk was about replacing the legacy PulseAudio-based solution with a modern PipeWire-based one and replacing camera pass-through with Qubes Video Companion. As Demi refereed Qubes OS currently has poor support for audio and video capture. Audio capture works if used properly, but is easy to misuse and its latency is excessive. Video capture is not supported except via device pass-through, which raises serious security concerns.

Day two started with Welcome to Qubes OS Summit 2022 - Day 2. It was a short introduction held by Piotr Król who sum up the first day and showed the agenda for the second day.

The first speaker of the second day was Wessel Klein Snakenborg who presented How Dasharo coreboot-based firmware helps NovaCustom’s customers. NovaCustom has previously experienced a number of problems related to the proprietary firmware of the laptop. In this talk, Wessel presented three cases in which Dasharo open-source coreboot-based firmware has played an important role. The first case is about the desire for a modified fan curve. The second case study concerns an application where the customer asked whether it is possible to disable certain CPU options, which turned out to be necessary for audio production. The third case is about the implementation of an own startup logo in the firmware.

In addition, there will be an explanation of the security aspects of the Dasharo firmware that NovaCustom has recently started using. Thanks to the growing active Dasharo community, the firmware can be increasingly optimized to the needs of our users. Although Qubes OS already has a number of certified laptop models, its hardware is often quite old. The need for newer hardware that is fully compatible with Qubes OS is there, and this is where NovaCustom could play a role with certified hardware and firmware that is fully adapted with the Qubes OS operating system.

The next presentation was Qubes User Support Stories held by nestire. Nestire tried to answer the following questions during his presentation:

After a short break, Tobias Killer presented his presentation about Qubes OS Documentation Localization. The presentation covered the steps already taken, the current status, and the future tasks connected to the Qubes OS documentation localization. Tobias gave a brief look at the tech stack and the tools used to build the proposed localization workflow. Tobias concluded with perspectives, the next steps, and an invitation to participate in his project. The ultimate goal of this endeavor is the continuous localization, and therefore the rapid and reliable delivery of high-quality translations.

Michał Żygowski talked about Qubes OS on modern Alder Lake desktop There are very few desktop platforms that are user-controllable through open-source firmware. Moreover, they haven’t necessarily been tested with Qubes OS. However, the recent initiative to port a modern Alder Lake desktop to coreboot opened a new door for privacy and security respecting machines capable of running Qubes OS. In this presentation, Michał showed a demo of Dasharo distribution compatible with Alder Lake-S desktop MSI PRO Z690-A WIFI DDR4 running Qubes OS. He also described new updates to Dasharo firmware and challenges awaiting future development. Michał also presented how Dasharo plans to meet the future Qubes certification requirements and approaches the openness of the firmware based on the Dasharo Openness Score of various supported platforms.

The next presentation was Qubes OS: Towards Being a Reasonably Learnable System held by Deeplow. It was following up on last year’s presentation. Deeplow presented the final work for his contribution proposal for an integrated onboarding tutorial for Qubes OS.

TrenchBoot - the only AEM-way to boot Qubes OS was a second presentation held by Michał Żygowski. The presentation described the project plan of improving and extending the Qubes OS AEM with TrenchBoot covering both Intel and AMD hardware, TPM 1.2 and 2.0. The goal is to unify the D-RTM early launch and Anti Evil Maid software to secure the Qubes OS boot process for basically any hardware device (as long as it supports the required technologies). The presenter will give a detailed overview of project phases and tasks to be fulfilled as well as the cost outline. In the end, a short demo of Qubes OS AEM with TrenchBoot on Dell OptiPlex 7010/9010 with Intel TXT and TPM1.2 will be shown.

After the short break Brent Cowing was talking about Secure hardware for a secure operating system. In this session, Brent discussed why we should care about open source firmware and the ways we can reduce the risk of firmware persistent malware. As the world is evermore consumed by detecting and preventing ransomware and other financially damaging attacks on systems and organizations, far too little attention has been paid to an attack surface common to every single vulnerability - firmware. It’s time for the firmware to be open source and secure.

The last presentation was held by Michał Kopeć who was talking about Dasharo vs vendor firmware performance on QubesOS - a comparison. The presentation compared performance between Dasharo and Vendor BIOSes on Dasharo-supported platforms, in the context of QubesOS usage. Michał attempted to present the most significant differences that an end user will see when installing Dasharo over the original proprietary firmware. In this presentation, Michał showed the differences in performance as measured by a set of benchmarks, and talk about what causes them and what challenges there are to bring performance to a state that is competitive with the vendor BIOS. Michał also discussed how these differences may impact QubesOS users.

During the second day, Marek Marczykowski-Górecki hosted the Design session: hardware requirements, firmware security. During this design session, participants discussed the requirements of the Qubes OS certification for new platforms.

The last day was the time to talk and code projects connected to the topics discussed during the design sessions. The topics were split into themes: GPU, and Qubes OS certifications requirements for the software and for the hardware. It was a productive time that allows us to exchange our experiences. If you’re interested in what we’ve done during this session I encourage you to take a look at the Hackathon highlights.

If you think we can help in improving the security of your firmware or you looking for someone who can boost your product by leveraging advanced features of the used hardware platform, feel free to book a call with us or drop us an email to contact<at>3mdeb<dot>com. If you are interested in similar content feel free to sign up for our newsletter