Founded in 2009, originally held in Dublin until 2016, when it moved permanently to Lisbon, Web Summit is considered to be the largest tech event in the world. Until 2019 there was no representation of 3mdeb on Web Summit, but now we’ve decided, that it is the right time to send one.

“Tech event” is the keyword that turns all of us on and makes us travel over thousand kilometers, but after the struggle, I was the one who becomes the first official 3mdeb representative on that event. Full of hope and curiosity, with a great financial and organizational support provided by Pomeranian Export Broker, at Sunday, November 3, I’ve joined Polish group on the Lech Walesa Airport in Gdansk.

Have you heard about the main types of a lie?

In the classical version, there are small lies, big lies, and statistics. I’ve found another - calling Web Summit a tech event. Blows up the scale. It was political, it was sociological, it was futuristic, but it has much more to say about the people relations, than about technology.

The opening day was a series of presentations. The main guest wasn’t physically with us, but his speech was streamed from Russia. Edward Snowden - the great warrior for freedom of speech, which had left the western world and settled down in the capital of freedom - Moscow. Though I don’t consider him the most reliable man living, the speech itself was fine. In the end, he started to accuse companies by their name for trying to enslave the world population, and when he got to Huawei it appeared that he runs out of time. The next speaker was Guo Ping, Huawei’s Rotating Chairman - astonishing coincidence, isn’t it? He tried to persuade an audience that all the things anyone heard about his company are lies, no matter the facts. Hopefully, there were a lot of young and inexperienced people there, in the other case, the audience might not be persuaded.

After the opening, there should be a Night Summit event. But it was raining, and almost no one came.

Day two started with a something-like-fairs, but many of the companies exhibiting there had nothing but themselves for sale. At first, I stayed at Polish Agency for Enterprise Development stand. I want to sincerely thank all the people there for helping me to present our products and let me leave our materials on the stand. After several hours of explaining to children what firmware and embedded are, I’ve decided to stop wasting my time, and move forward to hunt some commercial pray. I’ve visited surroundings stands to look for someone who would understand what are we doing, why, and be interested in cooperation. It was tough. Web Summit is large. I was told that there were over 70.000 attenders and 12.000 CEO. Founding someone who runs a REAL tech company suitable for us was a lot of walking and talking. Finally, I’ve succeeded but in a bit unexpected way. 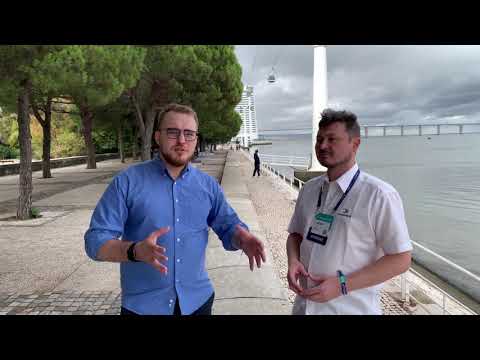 Vadim has been a member of a Pomeranian Export Broker team and it appeared that the darkest place is under the candlestick.

Day three was marked by the Ukrainian Summit - as far as I know, this party was unofficial and the founders of Web Summit didn’t have a hand in it. Yet, that was the largest party during this event. I suppose that many deals made during this Web Summit had their origin that night. Of course, firsts go first and it was run after a long day of hard work and meetings. In spite of the lack of IT companies that fulfill our expected areas of interest, I’ve looked for some other interesting projects and found a lot. People making food from garbage, creating plastic materials with fullerene filling, writing car-lot-sharing apps and so on. Even more people talking about how it is good to make food from the garbage, how it is bad to create plastic materials and how car-lot-sharing can put influence on the extinction of endangered species. All in all, it wasn’t boring at all. That night the Ukrainian Party was great. I felt young as if I was 20 gain and handsome as I have never really been. Best regards to my Ukrainian friends and greetings to one of the most beautiful cities I had a pleasure and honor to visit at night - Lisbon.

The next morning has started a bit later than usual, but we’ve put great pressure to make it efficient. Personally, I’ve talked to more than a hundred people, visited all the stands on the whole conference and shared cards with anyone who would at least share my interest in IT. In the meantime, it appeared that our airline has some problems and there might be some issues with coming home on time. I think the best summary of this whole trip is that the perspective of its unintentional extension wasn’t disturbing at all.

Web Summit wasn’t an IT conference in the matter I’ve expected, yet It was worth going. If I have another chance to go there I wouldn’t hesitate at all. If you think we can help in improving the security of your firmware or you looking for someone who can boost your product by leveraging advanced features of a used hardware platform, feel free to book a call with us or drop us email to contact<at>3mdeb<dot>com. If you are interested in similar content feel free to sign up to our newsletter