When you work with embedded systems long enough, sooner or later you realize that some sort of update mechanism is required. This is especially true when more complex systems, running with an operating system, are taken into account. Nowadays Linux is being picked increasingly as operating system for embedded IoT devices. In following post we will focus on those in particular.

In fact, from my experience update mechanism is vital part of many embedded applications. When project is aimed to be maintained in a long run, it is one of the first features being developed.

On standard Linux machines updates are generally performed using one of the package managers. This approach may seem tempting, but for embedded devices it usually leads to more issues than it has advantages. When number of possible packages reaches hundreds or thousands, it becomes impossible to test application stability with various revisions of those packages. Approach where we release one thoroughly tested rootfs image is both more reliable and less time consuming in a long term.

Our vision of update system

In most of our project where software is concerned, we are heading towards double copy approach. The main idea is to have two separate rootfs partitions, which always leaves us with at least one copy of correct software. Core of developed update systems is usually similar to the one presented on the graph below. 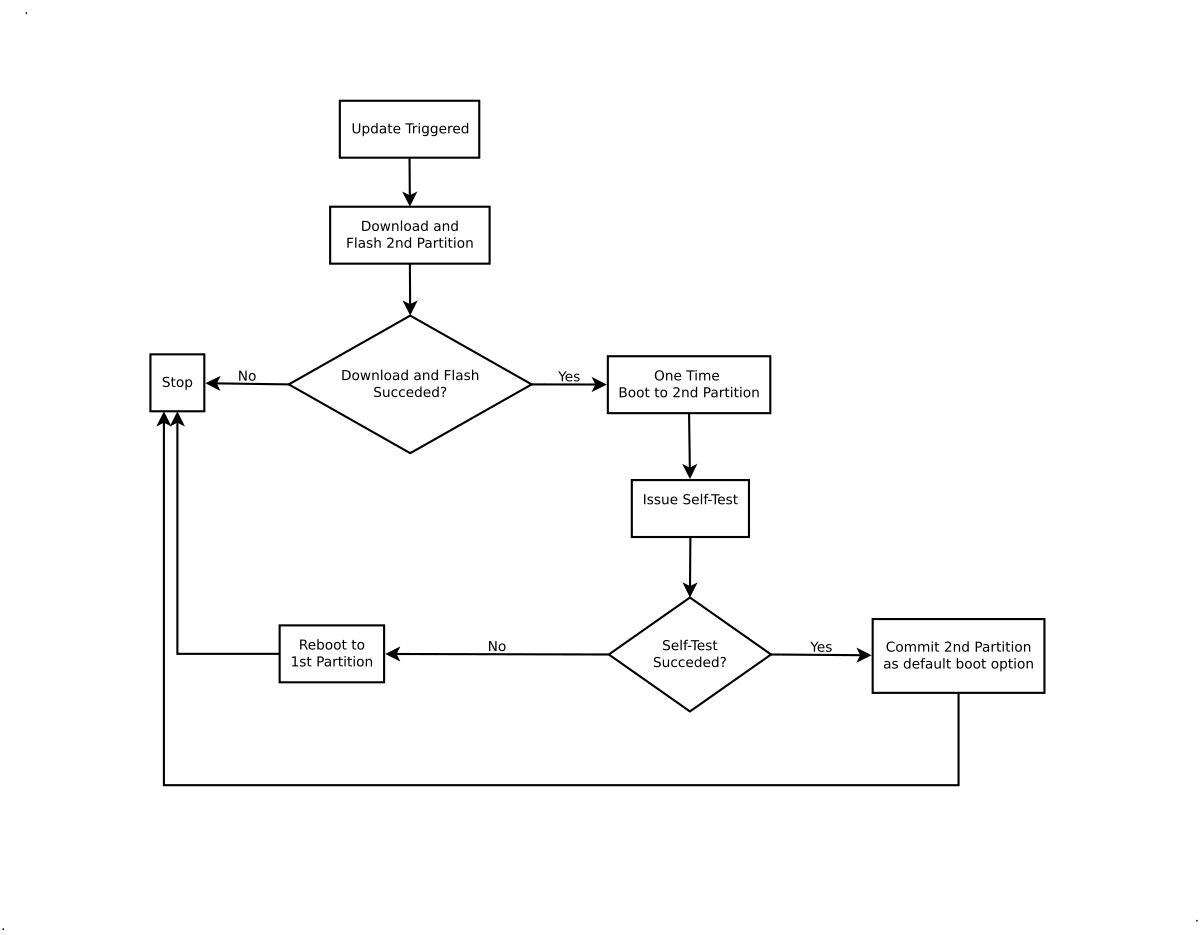 SWUpdate is application designed for updating embedded Linux devices. It is strongly focused on reliability of each update. Every update should be consistent and atomic. Major goal is to make it completely power-cut safe. Power-off in any phase of an update should not brick the device and we always should end up having fully-functional system.

In the end I will give short example of implementation of such update system used in 3mdeb.

*.swu image is a cpio container which contains all files needed during update process (images, scripts, single files and so on). In addition it requires sw-description file to be present. This file describes .swu image content and allows to plan various update scenarios through setting appropriate flags in each section.

SWUpdate supports dual image approach by providing software collections in sw-description file. Such simple collection inside can be written as:

As you can see below, there are two software modes to choose from:

Selection of given mode is made by using -e command line switch, e.g.:

In double copy approach we are using software collections mainly to point to target partition on which update will be performed. File (image) name is usually the same in both.

It can be used to exclude the risk of installing software on the wrong platform. sw-descrption should contain list of compatible hardware revisions:

When I last checked this, only board_revision string was taken into account when it came to checking for image compatibility. So in these terms, boards: board1 revA and board2 revA would be compatible.

The first string (board_name) was only used for board specific settings.

As for hwrevision file - when using Yocto, I usually ship it through swupdate bbappend file - specific for each target machine.

Basic usage of SWUpdate involves executing it from command line, passing several arguments. In this scenario image can either be downloaded from given URL, or obtained from local file shipped on USB stick for example. For obvious reason in case of multiple IoT devices we are rather interested in downloading images.

Download support is provided by curl library. In current SWUpdate implementation it supports fetching from http(s) or ftp. However curl supports many other protocols. In fact, at the moment we are using SWUpdate with fetching from sftp server with no source code modification. In this case, private key (id_dsa) must be located in $HOME/.ssh path as explained in curl documentation regarding CURLOPT_SSH_PUBLIC_KEYFILE. This behavior could be documented in SWUpdate documentation or even another command line parameter added for key location. This could be in scope of further contribution into the project.

To download image from given URL, following command line parameters should be passed:

Note that there’s been syntax change a while ago. In previous releases (for example in the one present in Yocto krogoth release, which is still in use) it was just: swupdate -d http://example.com/mysoftware.swu

One of the concerns while using whole rootfs image update approach may be the size of single update image. SWUpdate offers handling of gzip compressed images as well. From my experience, size of such compressed images is not grater than 50 - 100 MB, depending on complexity of given application. With today’s network speed is not that much as long as there is no serious connection restrictions. When delivering compressed image, copressed flag must be set in corresponding sw-description section. It may look like below:

I always use this feature, as it drastically decreases update image size. Thing to remember is that you need to compress rootfs image itself (not whole SWU image). Also it requires gz compression, so use gzip application.

SWUpdate offers streaming feature that allows to stream downloaded image directly onto second partition, without temporary copy in /tmp. This might be especially desired when RAM amount is not enough to store whole rootfs image. This can be enabled by setting installed-directly flag in given image section. In this case it would look like this:

By default, temporary copy is done by SWUpdate to check for image correctness. I feel that with dual copy approach it is not really necessary as if anything goes wrong we are always left with working software and ready to perform update again. This is why we tend to use this feature pretty often.

When developing application for embedded system there can be a problem with not enough of hardware platforms for testing. Testing on host can also be faster and more efficient. When using Virtualbox, even update system could be tested. The issue was that, it usually uses GRUB as a bootloader and SWUpdate was supporting U-Boot only. With little effort we managed to add basic support for GRUB environment update in SWUpdate project and this feature has been recently upstreamed.

I will try to present an example setup that allows to experience mentioned SWUpdate features. It can be a base (and usually it is in case for our projects) for actual update system.

Below example fits for any embedded device running Linux with U-Boot as bootloader. In my case Hummingboard from Solidrun was used. 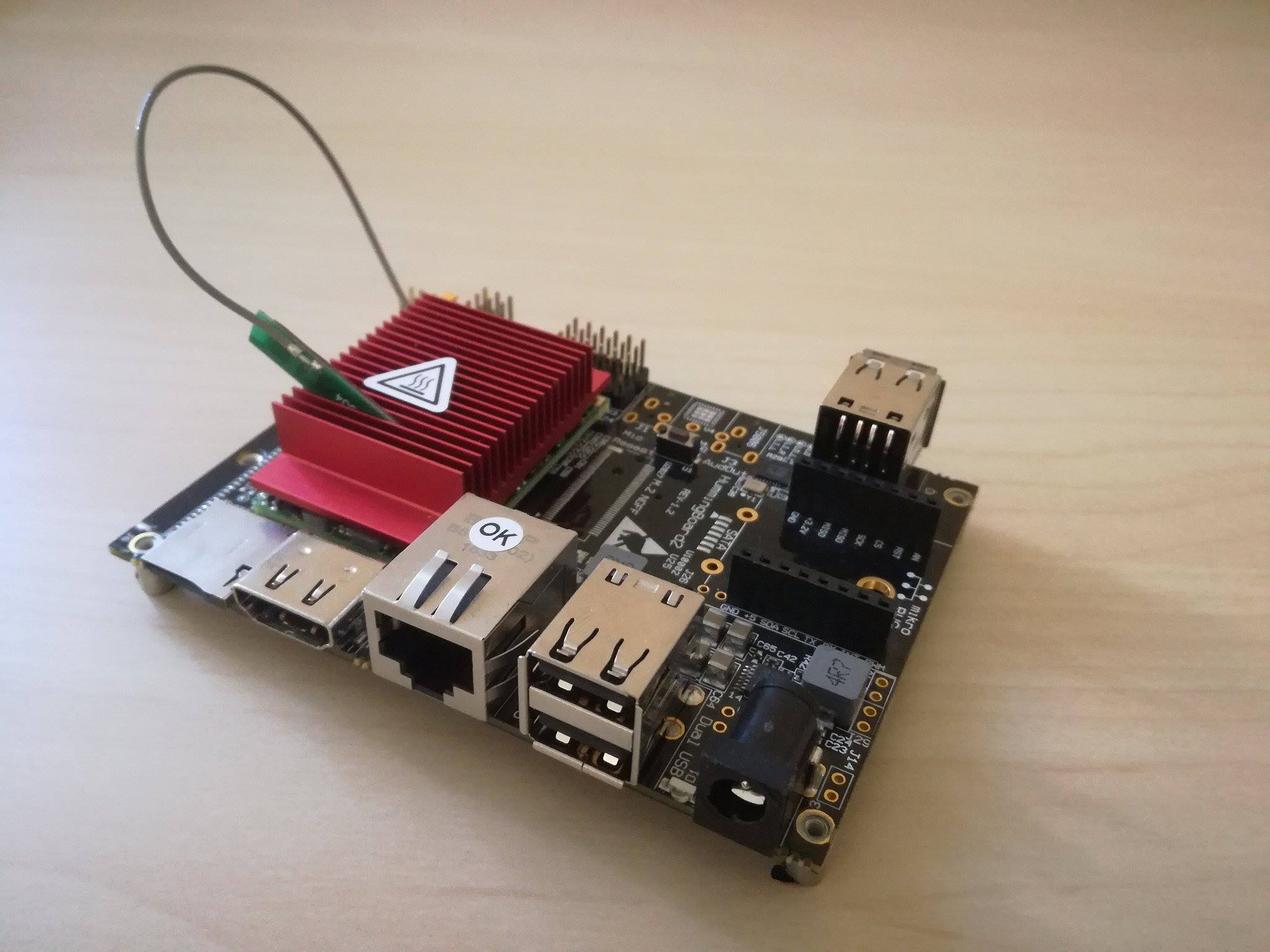 Of course you need a rootfs image to perform update with it. It can be prepared in may ways. For test purpose, you can even perform dd command to obtain raw image from SD card. An example command would be:

However, preferred method would be to use Yocto build system. Along with meta-swupdate it allows for automated building of rootfs image, as well as .swu containter image in one run. In this case, krogoth revision of Yocto was used.

In dual image approach goal is to pass information to bootloader after update has finished successfully. In case of U-Boot we can tell which partition to use as rootfs when booting. With below script we will boot into newly updated software once.

When booted into newly updated partition, some sort of sanity checks can be made. If passed, new software is marked as default by setting fback environment variable to point to this partition. We can modify bootloader environment using SWU image with just sw-description file. Below is an example of such:

Below is an example sw-description file including features mentioned above:

It can be found in standard directory for built images:

Refer to building a single image section from SWUpdate documentation.

I have only shortly described features that we commonly use. These are of course not all that are available. You can find out more in the list of supported features. Definitely worth to mention would be:

SWUpdate provides really powerful and reliable update mechanism. It’s job is only to download and reliably perform update according to metadata written into sw-description file. The rest such as picking right software from collection, getting current and available partitions, preparing bootloader scripts etc. is up to user. It may be overwhelming at first, but it is the reason why SWUpdate can be so flexible. You can pick features from (still growing) list to design update system that is perfect for your needs. SWUpdate will only assure that it is safe and reliable.

We hope that content of this blog post was entertaining and useful for you. If you have any comments or questions do not bother to drop us a note below. If you feel this blog post contains something useful please share with the others. As 3mdeb we are always ready to give you professional support. Just let us know by sending an email to contact@3mdeb.com.

Yocto meta-rte is now open for everyone