Fobnail is a project that aims to provide a reference architecture for building offline integrity measurement verifiers on the USB device (Fobnail Token) and attesters running in Dynamically Launched Measured Environments (DLME). It allows the Fobnail owner to verify the trustworthiness of the running system before performing any sensitive operation. This project was founded by NlNet Foundation. More information about the project can be found in the Fobnail documentation. Also, make sure to read other posts related to this project by visiting fobnail tag.

This phase is about provisioning Fobnail Token itself. The closing point of that process is creating a certificate for Token that can be used later after attestation, only if attestation finishes successfully. Before that happens, Fobnail Token must verify that Platform Owner can be trusted, and prepare an input for that certificate.

Assumptions and flow of Fobnail provisioning

Communication with Platform Owner happens through CoAP. Fobnail Token is a client, same as during communication with Attester. This is done to keep code footprint small enough to fit in nRF52840 dongle. As a consequence, all communication is initiated by the Token, so it is responsible for deciding which of the three flows (Fobnail provisioning, platform provisioning or attestation) it should follow.

First resource that Fobnail Token asks for during its provisioning is a Platform Owner certificate chain. It has a strictly defined format and its root must be provided to the token during compilation. Fobnail validates this chain, but because it has neither timekeeping nor (secure) networking capabilities, it isn’t able to check validity periods or CRLs.

Second request uses POST method and includes CSR (certificate signing request). Platform Owner responses to that with a certificate generated from that CSR, signed by Platform Owner’s private key. This certificate is verified against chain received in previous step and saved in non-volatile memory for later use. 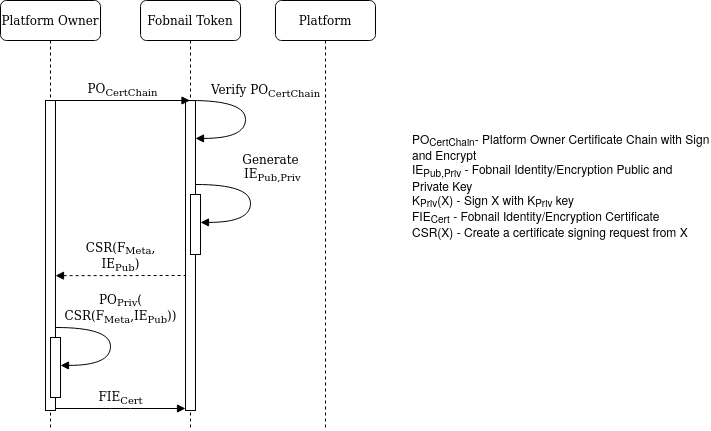 There are no good crates for generating RSA keys on Cortex-M, and in our tests using universal implementation wasn’t able to generate 2048-bit key in 5 hours. We also couldn’t use ARM TrustZone CryptoCell 310 which is included in nRF52840 for this purpose because it doesn’t have open-sourced libraries. Thus, currently Fobnail Token generates Curve25519 key, with help of Trussed.

It was originally designed to be used in Diffie–Hellman method to generate symmetric encryption key for communication between owners of two separate Curve25519 keys. Ed25519 is a signature scheme using Curve25519, which adds the ability to sign and verify data, including certificates. Unfortunately, Curve25519 can’t be used as encryption key pair. This is a problem that will have to be resolved to unlock full power of Fobnail Token.

Fobnail architecture doesn’t impose use of key for which certificate is being made. The only restriction that should be followed is that created certificate is not a CA, because that together with inability to use CRLs creates enormous security issue.

Usage of key should answer the question: “why do I want to attest the platform”? There is no universal answer, each use case has its own requirements. Example usages with corresponding X.509 keyUsage bits include, but are not limited to:

In any case, private key must never leave Fobnail Token. This may limit speed and maximal size of data that is signed or encrypted, as those tasks must be performed by the Token. For example, encrypting whole hard disk with Fobnail’s public key directly is a bad idea, but you can use it to encrypt a key used for decrypting the drive.

Obviously, support on Fobnail side is required to expose API that uses private key accordingly to the usage specified in the certificate, based on attestation result. This is not done in this phase.

Since we’ve changed the way EK certificate chain is obtained, Attester can no longer be run on simulated TPM as easy as before. Chain is now downloaded during platform provisioning, but for cases when Internet connection can’t be trusted we plan to add option to use certificate chain from file.

Because TPM simulator is not used, Fobnail Token is also started separately. There is also a new application for Platform Owner, which should be started on a separate, secure machine, but for testing can also be run on the same system as the other components.

Proper key and chain can be generated by following these instructions. chain.pem is a concatenation of all certificates, starting with root:

It must be started as privileged user, in order to access TPM and SMBIOS:

Currently Attester must have physical NIC because its MAC is used as part of metadata. This is a known issue that makes it unusable on platforms that don’t have one, such as virtual machines, wireless-only devices or controllers for which kernel doesn’t have a driver.

Fobnail SDK must be installed before building Fobnail Token software. After that, clone Fobnail’s repository:

To build and run on PC:

In both cases, root.crt must be located somewhere in fobnail directory. This is limitation of Docker.

When physical USB token is used, it must be assigned IP address (169.254.0.1/16) after it is plugged in. This can be done automatically by adding appropriate configuration to udev, systemd and/or another daemon used for network configuration. Refer to your distro’s documentation on how to do this or assign IP address manually. This inconvenience will be addressed in further releases.

Fobnail Token can be returned to its original state by:

In case of PC simulation, remove target/flash.bin from fobnail directory.

AIK and copy of EK can be cleared from TPM with following set of commands:

All phases required for provisioning and attestation are already in place, so following video shows whole process. This includes steps done by administrator (provisioning) as well as by end user (attestation). Provisioning is done once for given platform, repeated only if reference measurements change, e.g. after sanctioned firmware update. Attestation is repeated each time user has to attest the state of his/her platform.

For those with keen eye, TSS error and warning is printed during platform provisioning and attestation. They come from a bug in TSS that was reported here and fixed here. Since most currently used distributions use older packages, it is not available in them just yet. This can and is worked around by the code, but there is no way of silencing those lines.

With whole process tested at once, multiple issues became apparent. Those which are limited to one of the components are listed in specific repository (Fobnail Token, Platform Owner and Attester), and if it applies to whole project, it landed in documentation repository. There, we also want to build a list of possible use cases with guides for expected policies and certificates. If there is something we missed, feel free to add a new item to those lists.

If you think we can help in improving the security of your firmware or you are looking for someone who can boost your product by leveraging advanced features of used hardware platform, feel free to book a call with us or drop us email to contact<at>3mdeb<dot>com. If you are interested in similar content feel free to sign up to our newsletter

Fobnail vs other boot security projects