Fobnail vs other boot security projects

System boot security has been gaining more and more attention and importance due to forever increasing complexity of attacks on the software and firmware. Firmware vendors are incorporating more and more security features into the BIOS and UEFI, but let’s be honest:

Because of the above reasons many entities fail to correctly secure the boot process and protects the consumers hardware from the attackers. That is why companies like Microsoft are pushing the silicon, hardware and firmware vendors to enhance the platform security by establishing Secured Core PC standard and requiring TPM2.0 for Windows 11. For example one of the requirements of the Secured Core PC is the use of Dynamic Root of Trust for Measurement technology in order to measure the operating system software in the processor trusted execution environment impenetrable from external attack vectors. With such measurements one may use remote attestation to ensure the software that is running on the machine has not been tampered with, without relying on the possibly buggy firmware. What is more important Secured Core PCs aim to provide such high level security out-of-the-box as much as possible. This is very important because the security is still hard to achieve in an easy and straightforward way. To eliminate such hardships and obstacles open source projects emerged to simplify boot process hardening:

But do those projects solve all the problems? What to do with those measurements? The short answer is “remote attestation”. There is a need of a trusted entity that will tell the machine owner that the measured software has the approved cryptographic footprints (measurements). At 3mdeb we aim to create an open hardware USB security token called Fobnail which will act as a axiomatically trusted device and provide attestation services to avoid the use of network and potentially untrusted attestation servers or man-in-the-middle network attacks. In the long run we plan to combine Fobnail and Dasharo to securely deploy, provision and attest D-RTM capable systems. The project became possible thanks to the sponsorship of the NLnet Foundation.

Before we start explaining how Fobnail may improve the security of the boot process lets' review and compare the open source boot process hardening projects starting with safeboot.

First of all safeboot is a set of scripts and wrappers that help automate and speed up provisioning of the machine to leverage TPM and UEFI Secure Boot full potential. In short it packs Linux kernel, initial ramdisk (with safeboot scripts) and commandline parameters into a single EFI file and creates two copies of it for normal boot flow and recovery. Additionally the root filesystem encrypted with the password sealed to the TPM and Static Root of Trust measurements. The boot flow is presented on the diagram below: 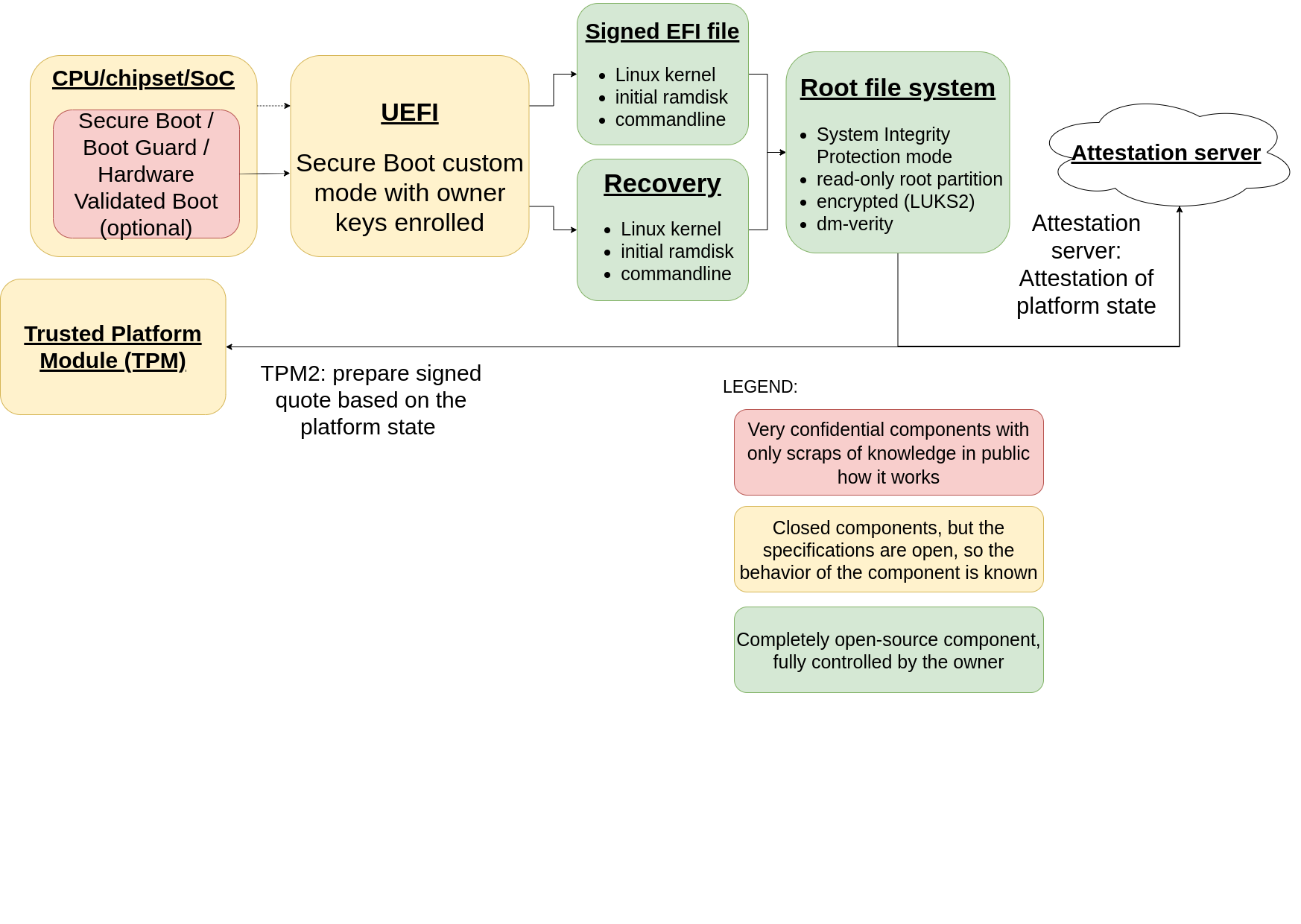 So how does this work? When UEFI firmware finishes the platform initialization and is ready to boot the OS it executes EFI file with the packed Linux kernel and initial ramdisk, but this file is being signed with custom Secure Boot keys generated during the provisioning process. During the provisioning phase these keys' certificates are enrolled into the firmware and the private parts are migrated to a USB HSM key in order to protect the key from leakage. This USB key is later used for signing the EFI files used in the boot process. Moreover the operating system root filesystem is protected with disk encryption. The decryption password is being sealed inside TPM to the pre-calculated measurements of the firmware and the packed Linux+ramdisk in an EFI file. So basically if the firmware and Linux components have not been tampered with, the decryption password will be unsealed automatically, if not then you are forced to boot recovery mode and resign, recalculate measurements and reseal the decryption password (which is stored on some backup drive for example). There are of course safety measures that do not let unseal the decryption password second time, by extending one of TPM’s PCRs once again (the unsealing policy will fail and the secret is not unsealed by TPM)

However the whole security model is as secure as the firmware itself. If the firmware get’s compromised or tampered with, it may fake the firmware measurements and keep a persistent malware module in the firmware storage. That is why a strong Static Core Root of Trust is needed like Intel Boot Guard, etc. But where all this leads us? Well at the end of the boot process of course we would like to attest the firmware and software by sending a set of platform integrity measurements to the attestation server. But is the attestation server or the network connection secure? What should one do without a network connection? The Fobnail USB token can answer all these question, but we will discuss it later in the post.

heads is a project that wraps up the build system for the firmware and Linux kernel together in order to produce a single binary with open source firmware with hardened Linux kernel containing boot security utilities. The only supported open source firmware implementation is currently coreboot. Let’s have a look at the example boot flow with the use of USB security token without a pre-boot firmware verification technology:

Similarly as in the safeboot case, the firmware is doing measurements of the executed components and extends the TPM PCRs. In the coreboot’s last stage the heads Linux kernel is launched where all the checks and decisions are made. heads uses multiple keys and secrets to protect the machine, e.g. TPM TOTP secret, LUKS encryption key and disk encryption key. We won’t go into much details how each key is used, what is really important is how TPM TOTP is related to the firmware. TPM TOTP is a one-time 6 digit code generated from a secret and a current timestamp. Such a code is typically only valid for 30 or 60 seconds, then a new one is generated with newer timestamp. Alternatively a HOTP scenario may be used where USB token verifies that its secret and host’s secret is the same and the counters on both sides are the equal (incremented each time the secret is compared). heads unlocks the secret if and only if the firmware measurements match the policy to which the secret has been sealed in TPM. If all checks are passed and keys are unsealed, the disk is decrypted and the target operating system kernel is kexeced. Now imagine the malicious firmware replacement if the bootblock is not protected (so there is no Core Root of Trust to verify other firmware components):

Malicious firmware has performed the measurement replay attack, by extending TPM PCRs with the same values as trusted firmware would. In such case the TOTP/HOTP secret will still be unsealed without the user knowing that the firmware has been tampered with (TOTP/HOTP does not detect tampering in such case). This is potentially dangerous since there may be a malware installed on the firmware storage. One would need a protection on the silicon level like Boot Guard to ensure that the firmware has really changed.

Instead of trusting the firmware to do the job right, one could simply use Dynamic Root of Trust for Measurement to let the silicon create the secure enclave and measure the operating system components. Only based on such securely created measurements we may be sure (by performing remote attestation) that the software we want to run is correct. But again the risk of untrusted network connection or attestation server arises.

Summing it up we have uncovered a few problems with the current boot hardening projects and attestation:

The Fobnail Token is a tiny open-source hardware USB device that provides a means for a user/administrator/enterprise to determine the integrity of a system. To make this determination, Fobnail functions as an attestor capable of validating attestation assertions made by the system. As an independent device, Fobnail provides a high degree of assurance that an infected system cannot influence Fobnail as it inspects the attestations made by the system. The architecture is based on the IEFT specification - Remote ATtestation ProcedureS (RATS) and the attestation procedure on Reference Interaction Model for Challenge-Response-based Remote Attestation (CHARRA).

So in short, the main principles of Fobnail are:

So how does it improve situation for the mentioned projects? As long as the firmware is protected the risk is not so high that the components have been tampered with. But the attestation process over the network may be hijacked or return untrustworthy result. By using fobnail, whole attestation and decision process is moved to the tiny USB device so that the user can confirm the result visually. This solves the problem of untrusted networks or attestation servers.

Secondly if we do not trust that the firmware is bug-free and provides reliable measurements one may use D-RTM when booting the target Linux kernel and perform the attestation based on D-TM measurements with Fobnail.

Thirdly when we look at TOTP/HOTP the whole decision process of secret unsealing is done on the platform, also the platform is responsible to display or send the 6 digit code to the display or USB token. This creates a potential risk that the code has been faked and the measurements aren’t really reliable. Fobnail removes such risk by moving the platform state evaluation on the token side. Before the Fobnail token becomes usable it must be provisioned first with:

So Fobnail knows about all the known good platform states. The host responsibility in the attestation process is to provide the TPM quote (set of platform integrity measurements, event logs, etc.) signed by the attestation key to the token for evaluation. Then the decision is returned to the host and indicated to the platform owner with a physical or digital response. Fobnail is also a flexible architecture which allows to perform the attestation of multiple devices (by using multiple RIMs and policies).

As you can see the decision process is now done in the secure environment unlike the example heads boot flow. This doesn’t however resolve the problem of reliable measurements if the Static Root of Trust measurements are used. There is still the risk that the measurement have been faked because firmware has been tampered with or was not protected. With the help comes the D-RTM. Imagine compromised heads boot flow but this time the USB token is compliant with Fobnail architecture:

As you can see the firmware measurements may be replayed if the firmware is not protected and we cannot avoid this, but still we may use D-RTM to securely perform the measurements of operating system components and use these to perform attestation to get a trustworthy decision about platform software state.

Fobnail token is the future of the remote attestation attestation. This project funded by the NLnet is only the beginning. We believe in open source and by making the Fobnail open hardware and open software we hope it may be improved by community and integrated by many USB security token vendors. Currently we are looking for early adopters in area of:

which would like to integrate or offer Fobnail as a part of their products/services. In return 3mdeb offers commercial support and associated marketing for the adopters. If you think Fobnail may enhance your products or security of your devices do not hesitate to contact us. Feel free to book a call with us or drop us email to contact<at>3mdeb<dot>com. If you are interested in similar content feel free to sign up to our newsletter