I have an old cheap Allwinner A13 tablet with low memory and a weak CPU; it’s slow even for internet browsing, so I’ve been using it primarily for development. Some time ago, I started porting EDK II to it. I plan to replace the current Allwinner bootloader with a full-featured UEFI implementation capable of booting mainline Linux, FreeBSD, and possibly Windows 10 (if I will find ARM32 build), all running with ACPI. Using ACPI would allow OS to boot without SoC specific drivers, as all basic functionality like CPU/RAM detection, frequency, and voltage scaling, serial port, RTC, etc., would be implemented by ACPI and runtime drivers.

The project is still at its early stage - currently, there is basic support for some hardware:

Currently, only my XW711 tablet is supported, but UEFI should work on any Q8 tablet as these tablets have a very similar board. Some peripherals differ, like touch panel, Wi-Fi card, or internal memory (NAND instead of eMMC). So far, this is not a problem since eMMC is disabled by default.

You can read about Q8 from its article at sunxi wiki, for XW711 there is no significant information available, except in its FEX file available in sunxi-boards repo and here:

UEFI can boot Linux if you provide a valid FDT. Currently, you can do this only manually, so you need a working UART connection. On XW711 (and on Q8), UART pads are located on the back of the board. There is also a second UART multiplexed with µSD, which can be used without disassembling the device. U-Boot already supports UART-over-µSD (CONFIG_UART0_PORT_F), soon I will implement this feature in UEFI.

Currently, I am working on USB peripheral mode support, which will allow me to move the DRAM initialization code into PEI. Currently, DRAM initialization is handled by a separate program called SPL (after U-Boot’s SPL). SPL initializes DRAM and returns to BootROM, which proceeds with loading UEFI image over USB (Allwinner BootROM has support for writing arbitrary memory, so I just write raw UEFI image and jump to its entry point). A USB driver will remove dependency on BootROM and the need for SPL. Moving DRAM initialization code into PEI makes it possible to fetch DRAM configuration from dynamic PCDs, which will be useful for overclocking. Yet another significant advantage is that I can use the PEI MMC driver to load the rest of UEFI, so when I get rid of SPL, I will add support for UEFI booting from SD and eMMC. Last but not least, I want my implementation to be PI spec compliant. To do that, I need to drop SPL and transfer some of its responsibilities (like DRAM initialization) to PEI. There is only one problem with this approach, BootROM has a 31 KiB limit on A13 and even less on A10 and A20 (despite SRAM being much bigger than that). Even now, PEI size exceeds that limit. There is a chance that I could compact it enough to make it fit, but I can’t be sure, and if it turns impossible, then I will have to keep a small MMC driver in SEC just to load PEI. Also, PI spec is unclear about the SEC phase, e.g., specification says that the SEC phase is the first phase to execute, but then what about BootROM, which is always the first program to run and most ARM SoCs have one.

Other things I will add shortly are, among others: CPU frequency scaling, SD/eMMC write support, display support, etc.

I have recently added basic LCD support (available on the display_support branch), so you should be able to see UEFI booting without using UART. Please note that you won’t be able to boot into OS, as you need to load FDT manually. I will fix this problem shortly. 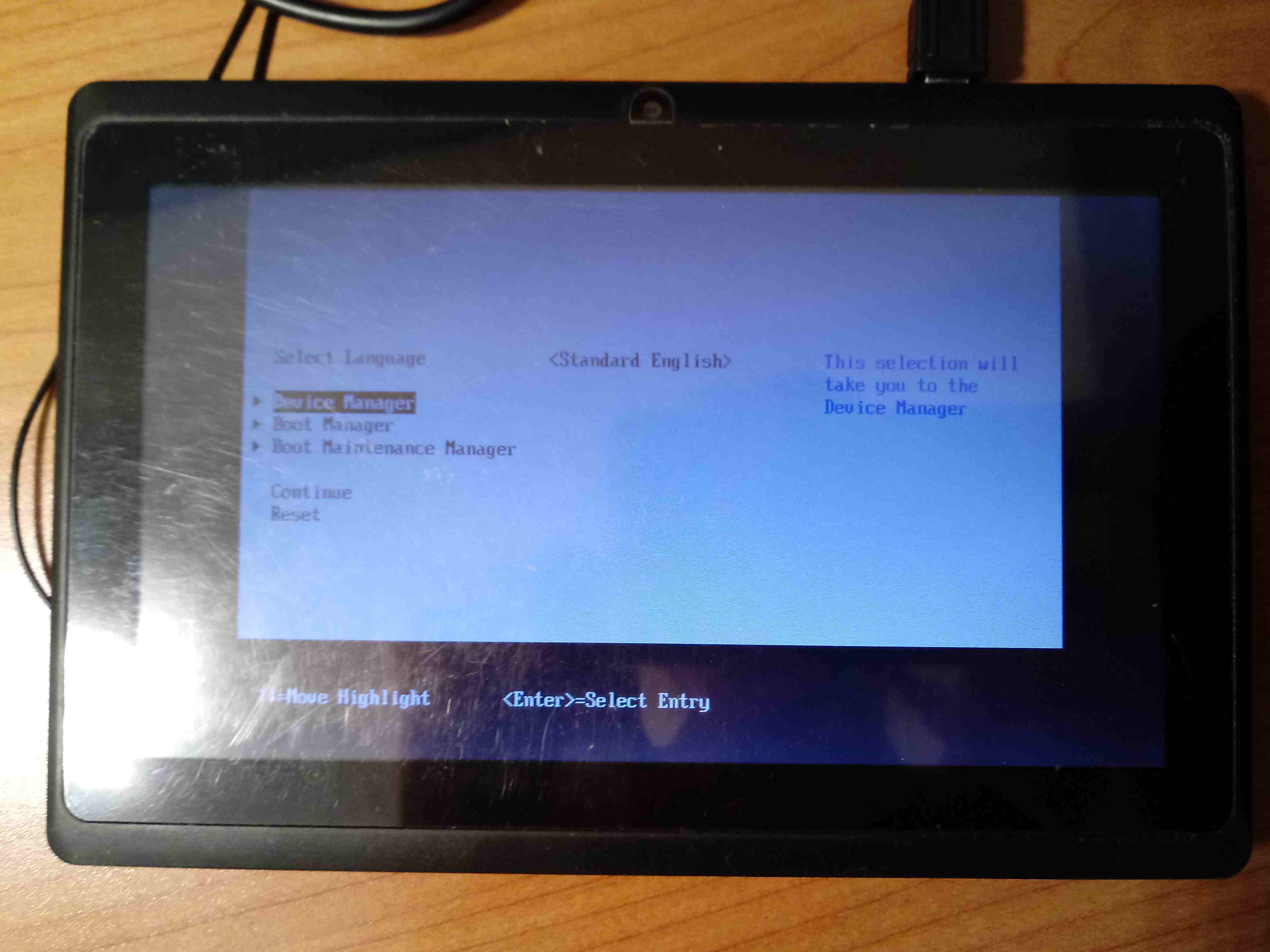 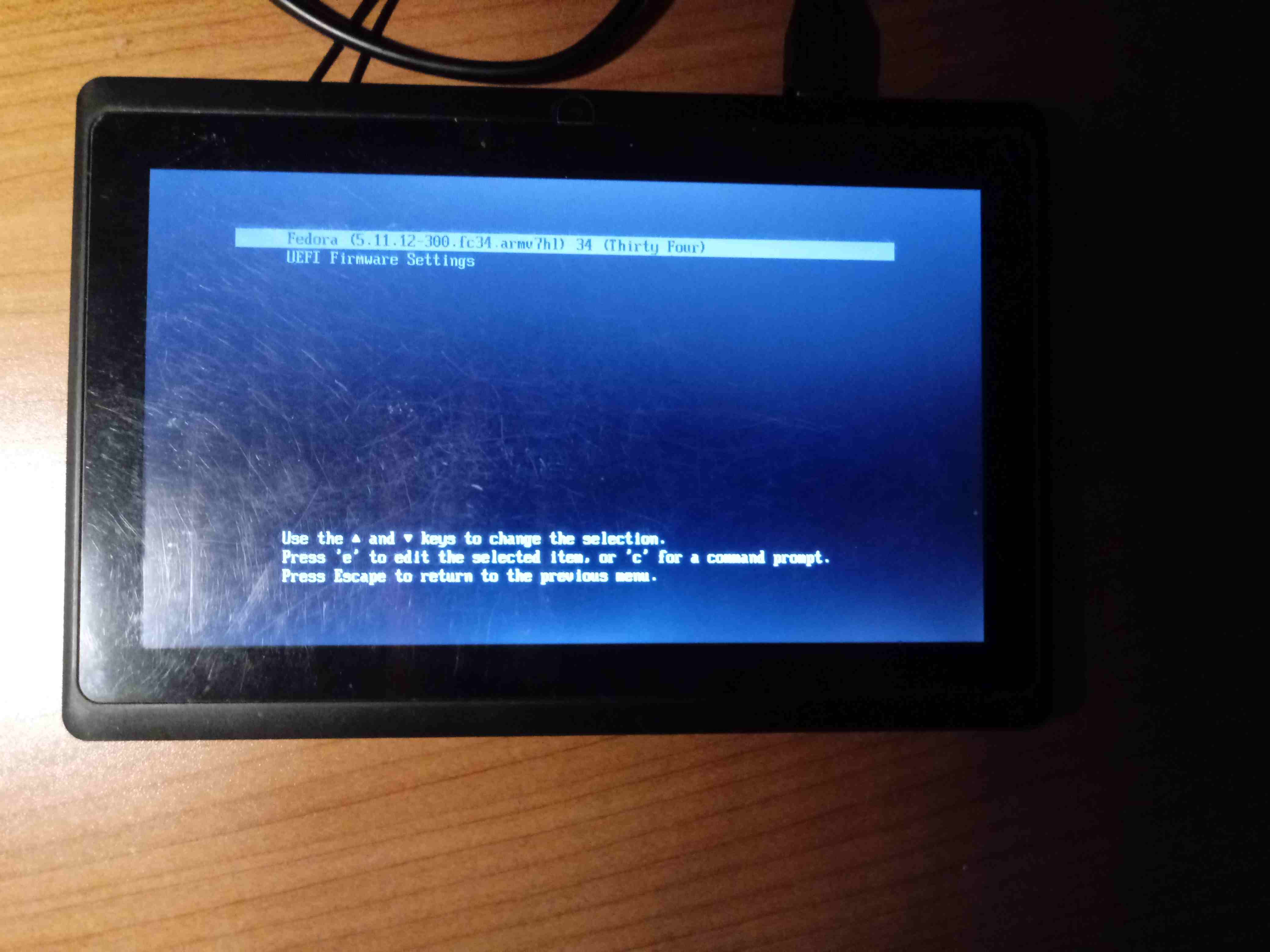 My long term goals include:

You can get BSP source code from my GitHub repo. It has been tested with EDK II v2021.02, which you can obtain from TianoCore GitHub repo.

If you want LCD support, you need to switch branch:

You can build it directly on your host system. Note that this was tested on Ubuntu 20.04 with GCC 9.2.1 and may not work on other distros with either too old or too new compiler.

Alternatively, you can use 3mdeb’s Docker container, which provides a stable build environment independent of your distro.

This builds two files: SUNXI_SPL.fd and SUNXI_EFI.fd. For sunxi-fel to accept SPL, you have to patch its header. A tool for this purpose is written in Rust, so if you don’t have Rust installed already, you can get it from https://rustup.rs.

Most of the basic stuff is already working, and when I get boot from SD and eMMC working, UEFI will become a usable alternative to U-Boot. Still, there is much work to do, especially ACPI support, and runtime drivers may take a long time. For now, it will be possible to boot OS using FDT. Then I will gradually implement missing stuff till I get a full-featured UEFI implementation.

If you think we can help in improving the security of your firmware or you looking for someone who can boost your product by leveraging advanced features of used hardware platform, feel free to book a call with us or drop us email to contact<at>3mdeb<dot>com. If you are interested in similar content feel free to sign up to our newsletter.