The Remote Attestation Procedures (RATS) describe the methods of trustworthiness verification of an attested device (the “attester”). 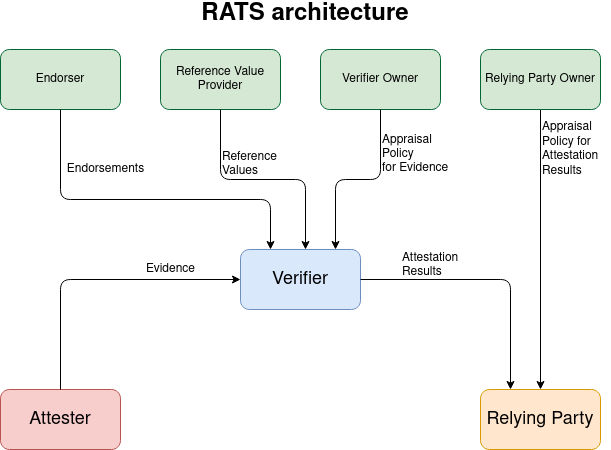 The verification proceeds on the basis of believable evidence. The verifier checks the endorsement from endorsers, reference values, and the evidence against the appraisal policy from the verifier owner.

The endorsement is a secure statement that the attester can use to sign the evidence. For example in the TPM2 context endorsement will be the attestation private key. It confirms the integrity of a public key, which is used to verify the signature of the Evidence.

The verifier sends the attestation result to the “Relying Party”, which decides whether the attester is trustworthy.

The IETF RATS specifies also basic models for communication between an Attester, a Verifier, and a Relying Party. The Passport Model and Background-Check Model are described in details in the IETF document. In this blog post, I will describe the architecture and proof of concept implementation of the CHAllenge-Response based Remote Attestation (CHARRA).

CHAllenge-Response based Remote Attestation with TPM 2.0

The Reference Interaction Models for Remote Attestation Procedures focus on the interaction models between the attester and verifier in order to convey the Evidence. 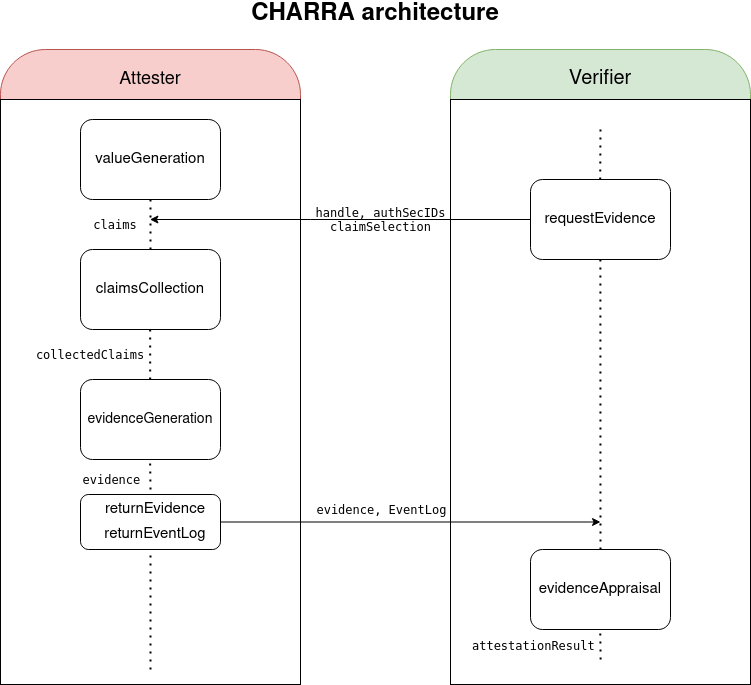 The attestation process is initiated by the verifier. It sends the remote attestation request to the attester. The request includes a handle, a list of authentication secrets IDs, and claim selection. The handle is composed of strongly randomly generated data (nonce), which guarantees Evidence freshness. Authentication Secrets IDs specify the target environment, which must provide the evidence. Claim selection tells the attester which claims should be included in the evidence.

More information about the Reference Interaction Models for Remote Attestation Procedures is presented in the IETF document.

Proof of Concept Implementation of the CHARRA

Our goal is to provide the CHARRA for physical TPM and separate the attester and verifier.

Separation of the attester and verifier

As I mentioned before the proof of concept (PoC) implementation of the CHARRA uses the docker container to provide and appraise evidence. Attestation data is obtained via a TPM Quote function. It provides the quote and signature for the given list of PCRs. In the PoC case, the attester and verifier generate separates keys. In that case verification of TPM quote and signature will work only when the keys are generated by the same TPM device. Otherwise, the evidence verification will fail due to a mismatch of the attestation identity key. To separate the instances we need to verify the signature and attestation data with the attestation public key.

In the PoC implementation, there is no endorser and key registration system. Every time the verifier sends the attestation request, the attester is generating the new attestation key based on the nonce. We need to obtain and send to the verifier TPM public key that is used to generate the TPM quote. TPM API (Esys) during the key creation allows obtaining the public and private part of the attestation key. We added to the charra_key_mgr the additional parameter that conveys the public key to the attester.

Following code allows the verifier to unmarshal the public key from the attestation response.

The verifier must not create its key. Once it will receive the attester public key, it must set the handle in its TPM context.

The following function allows to load external key and it creates key_handle that is used for the TPM signature verification.

The full scope of changes is available in the following pull request.

The PoC CHARRA implementation is using the TPM simulator provided in the docker container. To use CHARRA with the physical TPM we have created the Yocto layer

To proof the following concept we used the ASRock 4x4 Box R1000V with physical TPM as the attester and the PC with TPM simulator as the verifier. Note that you need dTPM. Unfortunately, fTPM included in newer AMD CPUs is not good enough. The following logs and videos show the attestation process.

Right now the verifier checks if the TPM Quote signature created by the attester is valid. In the future, we will add the policies that will verify if 17th and 18th PCR in the SHA1 and SHA256 banks are compliant with reference values.

Also, we want to create a system of registration attestation identity keys that will verify integrity for public keys. In the target solution attester won’t send the public key. It will be conveyed by the endorser.

The verifier should be able to start the attestation process, when device wants to be attested as soon as it starts. This is particularly useful for a large number of devices. It is easier to use a single known attestation server IP than multiple attesters addressees.

Currently, we are upstreaming the changes that were made during the development stage. Here is the list of current and merged pull requests:

If you are looking for the basic implementation of the TPM attestation with the shell commands, I encourage you to take a look at the tpm2-software community tutorial - Remote Attestation With Tpm2 Tools If you have any questions, suggestions, or ideas, feel free to share them in the comment section. If you are interested in similar content, I encourage you to sign up for our newsletter.