Network devices, such as modems, routers or servers are largely prone to cyber attacks. Their security issue is a priority if we want to keep everything behind them safe. As a solution user might choose from many available firewall softwares.

However, skeptics will say that this is still not enough, because how they can be sure if that software is in 100% compatible with their hardware? We are those skeptics… and we would like to introduce pfSense firewall running in virtual machine under Xen hypervisor. In that blogpost I focused only about boot process and what changes could be invoked to improve it.

pfSense, Xen, hypervisor… what is this all about?

pfSense is an open-source firewall (and router itself) based on FreeBSD distribution. It has a lot of useful features: high performance, scalability, management via web interface, large community support and many others. No wonder it is very popular and commonly used by companies and private users. However, its implementation is not always so straightforward. Basically there are two approaches:

As I mentioned earlier, we decided to implement pfSense in virtual machine under Xen hypervisor. Second type of implementation was also used by us, but only as a comparative test.

For better understanding our build configuration, you should be familiar with some basics about virtualization, hypervisors and Xen itself. I will introduce those issues at high-level overview. It should be enough to understand topic of that blogpost, but if you are more interested in those fields and want to read about details I refer to Red Hat article and to our blogposts with virtualization tag.

Virtualization is a technology which let you run several, different environments (e.g. operating systems) on one physical machine. Very important is fact that all those environments are run in parallel, which significantly increases efficiency. Differences between them mainly refer to supported hardware (e.g. architecture, controllers, peripherals etc.), way of operation and application. Virtualization technology concept is shown in the picture below.

As you can see, there is an additional virtualization layer. That layer is mostly implemented as hypervisor.

Hypervisor is a software which manages all virtual machines running on it. It is a middleman between hardware and every environment which user wants to create on the machine. If you think about virtualization technology, hypervisor is its essential part. In our implementation of pfSense firewall we used Xen hypervisor. It is a open-source project supported by many companies, which are firmware and IT market leaders. I won’t elaborate about Xen. Most features you need to know are:

As I mentioned earlier, there are actually 2 implementations of pfSense: bare-metal and with Xen. First one is used as reference one. If virtualized pfSense could approach to reference values, then it is considered as well-implemented.

Configurations for both realizations are shown in the table below.

We didn’t want to simplify our build too much. Virtualization is very powerful tool and besides compatibility advantages, it gives security features either. We decided to ‘close’ in VM not only pfSense, but also Network Interface Controlers (NIC). In this way we prepared platform on which is running Xen. Then Xen runs 3 VMs: - 2x Network Driver Virtual Machines (NDVM) (one VM for one NIC) - 1x pfSense in Virtual Machine.

It might sounds confusing, so I believe picture below would clarify entire concept. 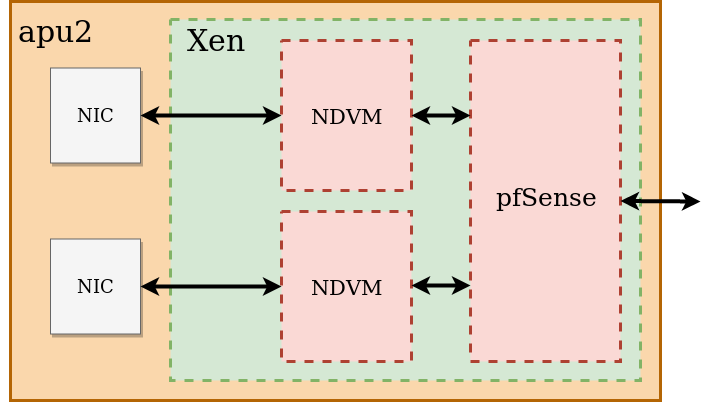 What we achieved by that? Platform is now more secure than with only pfSense firewall. Remember, that VMs are software environments adjusted by user. It’s you, who decides what to keep in there and what task it should perform. NDVM creates emulated network interface which is passed to pfSense. If something goes wrong (e.g. infected data get through pfSense), there is still additional protection which in eventually could isolate or cut off communication with physical device.

I believe that article brought you closer to the concept of virtualization technology. In next one, I will show you how we improve pfSense boot process and what issues we encountered. Also, you will find out more about VM creation in Xen and ways to debug it.

So stay tuned and look forward to the second part of that article!

Piotr Kleinschmidt
Junior Firmware Engineer interested mostly in the embedded world and automatics. Likes when things work his way, but if there is an issue to debug and analysis - he faces it.