Intel Trusted Execution Technology is a feature of Intel CPUs and chipsets to perform trusted measurement of the operating system software defined in Trusted Computing Group D-RTM architecture specification. Dell OptiPlex 7010 / 9010 is Intel TXT capable. All you need is an Intel TXT capable CPU (you may quickly check the Intel Trusted Execution Technology capability on Intel ARK for your processor).

Why do even Trusted Execution Technology and DRTM exist? First of all, we have to start with the firmware, the inevitable piece of code initializing the CPU and other hardware. Its responsibility is to prepare the platform to run an operating system, but also to load it. So basically the owner of the firmware has control over what operating system can be launched, and what is most important, how it can be launched. By “how”, one should understand whether the operating system is launched as intended without any undesired actions, like malware or spyware installation under the hood. In a case where the adversary has malformed the firmware on your platform, they may install key loggers and spying software to steal your data, passwords, etc. How to prevent that? How to ensure the operating system software was not tampered with? The answer is DRTM (Dynamic Root of Trust for Measurement). It can provide both load-time and runtime integrity of the software. Load-time integrity is when a trusted entity, i.e. an entity with assumed integrity takes an action to assess an entity being loaded into memory before it is used. Runtime integrity is when a trusted entity makes an assessment of another entity after that entity at an arbitrary time after execution of the assessed entity has begun. Often the load-time integrity of an operating system’s user-space, or operating environment, is often confused as runtime integrity since it is an integrity assessment of the “runtime” software. Since the dynamic launch is not tied to a power event like the static launch, this enables a dynamic launch to be initiated at any time and multiple times during a single power life cycle.

The below diagram represents the typical boot flow of an Intel TXT enabled machine with the measured launch.

Source: A Practical Guide to TPM 2.0

First, the BIOS is starting execution from the reset vector. It is responsible to initialize the Intel TXT to be used by the operating system bootloader. For this purpose, it calls the BIOS ACM (Authenticated Code Module) to properly set up Intel TXT. It must be noted that ACMs are signed by Intel and Intel CPU will only execute ACMs signed by Intel key. The key hash is burned into CPUs and is used to authenticate microcode updates and ACM signatures. Such measures ensure only the authorized code can initialize Intel TXT, which prevents its misconfiguration. When BIOS is done, it hands over the control to the operating system bootloader. Now it is the bootloader’s responsibility to perform the measured launch of the operating system by calling the SINIT ACM: 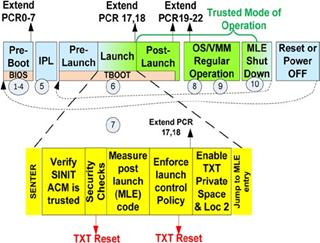 Source: A Practical Guide to TPM 2.0

Currently, there are two methods of executing SINIT ACM to perform measured launch:

The above diagram represents the tboot case. The approach taken by tboot was to provide an exokernel that could handle the launch protocol implemented by Intel’s special loader, the SINIT ACM and remained in memory to manage the SMX CPU mode that a dynamic launch would put a system. Tboot is responsible here for checking all the prerequisites necessary to launch SINIT ACM and whether the BIOS did properly set up the Intel TXT (otherwise the measured launch will fail and we may anticipate something is wrong with the machine/firmware in such case). If all checks pass tboot loads a SINIT ACM, specifies the memory ranges containing the operating system software to be measured and executed the SINIT ACM using GETSEC[SENTER] instruction. Again the ACM signature is validated and ACM is being executed in an AC RAM (special secured RAM for ACM execution) to ensure nothing will tamper with the execution or measurement process. The ACM calculate the hashes of the operating system software and sends them to the TPM Platform Configuration Registers (PCRs) which hold the hashes of the measured software. But they do not hold the hash itself, they combine the current register value and the hash of the software into a new hash which is saved into the register as a new value. This prevents easy faking of the PCRs (in order to achieve the same register value, all the measurements sent to the TPM must be done in the same order). BIOS does the same with BIOS code/modules, but how it is different in the case of TXT?

Due to the above reasons, the DRTM PCRs are always securely extended by hardware and thus can be trusted, despite firmware being tampered with. Also Intel TXT is blocking all interrupts, DMAs, and System Management Interrupts (SMIs) to provide a safe environment for the operating system software measurement. Example view of PCRs after tboot execution: 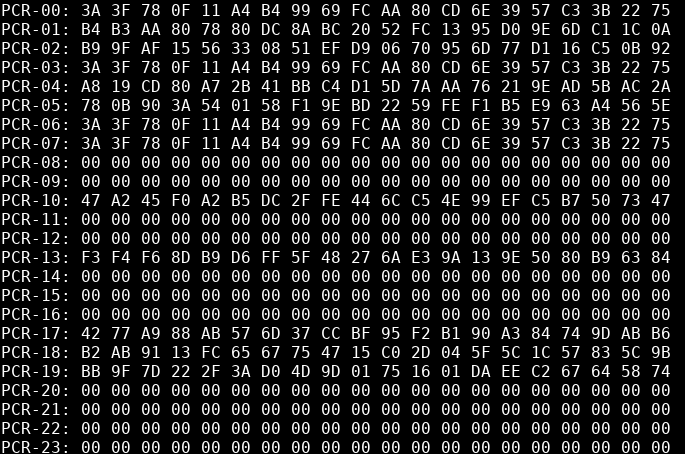 Additionally, Intel TXT offers user policies that can prevent launching software which measurement isn’t approved. It is called a Launch Control Policy a user-generated structure which defines various requirements to be fulfilled to consider the software/platform trusted, e.g. define the hashes of the operating system software that is allowed to boot.

Recently I have implemented the support for Intel TXT for Ivy Bridge and Sandy Bridge platforms in coreboot. There were several bugs and missing pieces in the Intel TXT driver developed by 9elements:

It also took some debugging of the registers whether they are set correctly and fixing any wrong assumptions about the requirements for calling an ACM. When everything was in place and fixed it took roughly 70 lines of code to add support for the OptiPlex 7010 / 9010 chipset code.:

Simple as it may sound, but in fact, it wasn’t. My first attempt at enabling Intel TXT was over a year ago which were also presented on QubesOS and 3mdeb minisummit.

To use the Intel TXT, you will need the BIOS ACM and the SINIT ACM. The latter is available for download from Intel while the former can be obtained by NDA only.

In case you have access to both here is a short guide on how to configure coreboot to use Intel TXT:

One of the most interesting uses of Intel TXT is the QubesOS Anti Evil Maid. As the name suggests it prevents Evil Maid attacks. It is pretty easy to set up using the guide from the repository. Here is an example of running Anti Evil Maid tboot to boot QubesOS:

Another interesting case is the remote attestation of the operating system software. However, there are not many ready to go solutions that could leverage DRTM to perform the attestation. There is CHARRA the proof-of-concept implementation of the “Challenge/Response Remote Attestation” interaction model of the IETF RATS done by Fraunhofer Institute. 3mdeb also works on an attestation USB token which will free the user from using doubtful attestation servers and the global network by implementing the attestation services based on CHARRA inside a USB dongle. For more information please visit the Fobnail page.

TrenchBoot is a framework that allows individuals and projects to build security engines to perform launch integrity actions for their systems. It leverages the Intel TXT and AMD Secure Startup for this purpose. On the day of writing this post TrenchBoot support in GRUB2 does not yet implement TPM 1.2 for Intel TXT path. Dell OptiPlex 7010 / 9010 can use the TPM 1.2 only with the Intel TXT. The TPM1.2 support will be implemented soon.

Intel TXT support will be included in the official releases of Dasharo firmware Dell OptiPlex 7010 / 9010. It will be fully tested with the automated deployment procedures to integrate all the features Dasharo has to offer. Join the Dasharo community on Dasharo Matrix space where you can find the most recent information about the Dasharo ecosystem and discussions about open-source firmware. Join the community of hardware and open-source firmware enthusiasts today!

If you think we can help in improving the security of your firmware or you looking for someone who can boost your product by leveraging advanced features of the used hardware platform, feel free to book a call with us or drop us email to contact<at>3mdeb<dot>com. If you are interested in similar content feel free to sign up to our newsletter