This post summarizes our current progress on making first coreboot port for POWER platform*, including Heads as a payload. It will also show how You can test it without having to actually flash firmware to PNOR permanently.

Description of OpenPOWER boot process and coreboot’s place in it can be found in previous post under OpenPOWER tag.

*) there is already a target for qemu-power8 that compiles successfully, but it executes just a single instruction: b ., that is, CPU is kept in an infinite loop.

List of initialization steps which are already implemented and seem to work as expected:

Other implemented components that are not initialization per se, but are used by it:

There are some known issues and TODOs that may require additional work, but Talos II based on coreboot is already able to boot all the way to target OS. It even does it faster than Hostboot, although such preliminary comparison has to be taken with a grain of salt – there are still places for optimization ;) 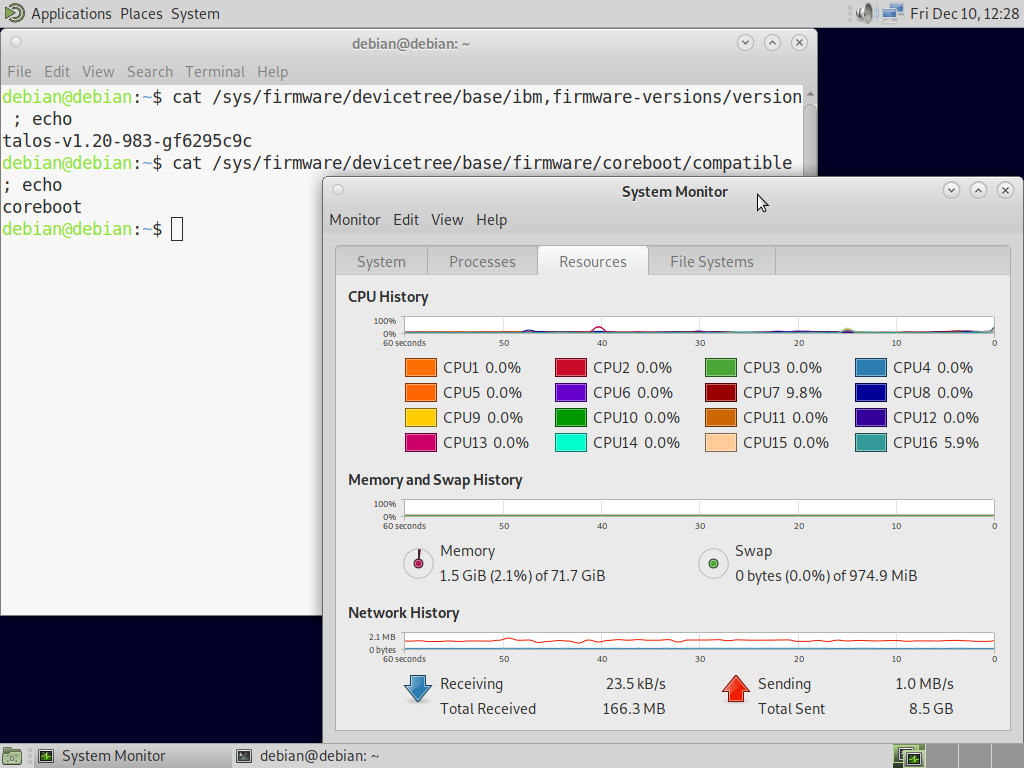 The biggest piece of code that is yet to be implemented is support for second CPU. Other than that, serial output needs some cleanup - all new code set high verbosity to print important lines while keeping standard coreboot internals quiet.

Most recent, not thoroughly tested version of the code can be obtained from develop branch on Dasharo’s fork of coreboot, but unless you want to test it, we suggest to stick to the release branch, or, if you don’t want to have to build it yourself, you can just use binaries compiled by us.

We also are currently in process of upstreaming QEMU target, but it takes time. If you are able to review that please do, we are impatiently waiting with pushing Talos II code until all issues with POWER9 skeleton are resolved and patches merged.

Changes to Heads also introduced another processor architecture. As it was first non-x86 platform, it required modifications to the build system in which x86 had been previously pretty much hardcoded. Another difference is that kernel image file for PPC64 is called zImage instead of bzImage. These two changes alone gave 429 added and 196 removed lines.

OpenPOWER’s PNOR layout and support in Skiboot requires that initramfs is bundled into kernel image itself and coreboot is build with separate file for bootblock due to HBB partition size. Separate PR was created for these two features because they can be used by other boards, it is already merged.

The biggest PR is all-in-one that adds mainboard. It has some of the changes introduced in PRs mentioned above for the sake of CI. Even though there are more than 3k lines added, almost a third of that are patches to Linux kernel created specifically for Talos II by Raptor CS.

All of listed PRs are either approved or already merged, so it is just a question of testing and time before they land in Heads' repository. 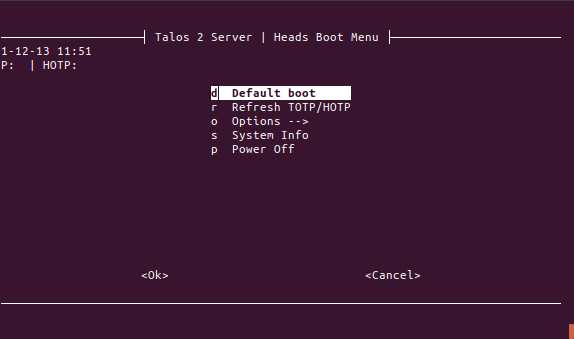 As with coreboot, instead of building Heads from scratch you can also use already compiled image.

Due to our limited experience with PPC64 architecture, as well as limited number of hardware configurations we can test, we ask you to test the code in everyday tasks. In case of any problems file an issue and we promise to do our best to fix it.

All required binaries, along with their hashes and signatures, can be found on Talos II releases page on Dasharo website. There you can also subscribe to the release newsletter or read how to build images yourself.

Because coreboot replaces Hostboot and is much smaller than it, we can reuse Hostboot’s partitions. Skiboot’s partition is left untouched, however for the sake of easier deployment and integration with coreboot we decided to put another copy of Skiboot into CBFS and load it this way. We still rely on HBBL (running from SEEPROM) to load and start HBB, but getting rid of this dependency is on our TODO list.

Heads can take place of Skiroot/Petitboot partition. This change is independent of coreboot ones, you can easily choose to substitute Skiroot with Heads, Hostboot with coreboot, or both. All mentioned combinations are supposed to work, if they don’t feel free to issue a bug report.

Summing up, these are the only changes to PNOR contents:

It is possible to test new firmware images without flashing the physical flash device. This makes testing and switching between two versions (e.g. Hostboot and coreboot) much faster and safer. Note that this requires v2.00 or later of BMC firmware.

Steps listed below assume that files containing new firmware components are already located in /tmp/ on BMC. Platform name and version numbers were stripped from filenames for convenience.

Keep in mind that tmpfs size is limited and exceeding that limit may result in unresponsive BMC, which in most severe cases requires hard power cycle. Unfortunately, /home/ doesn’t have nearly enough space to hold all of required files.

All of the following has to be run on BMC, not host system.

This blog post is just a summary of what is the current state and a quick how-to for testing. Once again, we are really looking for your feedback, either good or bad. Is there something that worked with Hostboot but doesn’t work with coreboot? Is there something firmware-related that you wished worked with Hostboot but didn’t? Let us know, either below in the comment or by creating an issue on Dasharo Issues.

If you are interested, in this video Piotr mentions some of challenges we had to overcome: