What features PCIe has?

What this blog is about

The goal of this post is to introduce readers to the concept of PCI Express capabilities. It briefly describes what they are and how they works. It also lists some example capability described in PCI Express (PCIe) specification.

Probably everyone knows about the existence of the PCIe standard. It is commonly used in PCs to connect various devices to the motherboard. Every possible modern graphic card uses PCIe, most sound cards use it, it starts to become the standard even for SSDs, and that’s just a tip of the iceberg. But how does the OS communicate with all of these devices and how does it know what these devices are capable of? This post will bring you closer to knowing the answer for those questions, but let’s start from the beginning…

PCI Express uses inverted tree topology. It starts from the Root Complex which is connected directly to the CPU and RAM. Root Complex branches to Switches and Endpoints. Switches branch founder and can be connected to more Switches or to Endpoints. Endpoints reside at the bottom of branches and have only one upstream Port (facing toward the Root). By comparison, a Switch may have several downstream Ports, but can only one upstream Port. Possible are also Bridges and Legacy Endpoints. Bridges are interfaces to other buses such as PCI. Legacy Endpoints are devices which were designed for the operation of an older bus like PCI‐X but now have a PCIe interface. 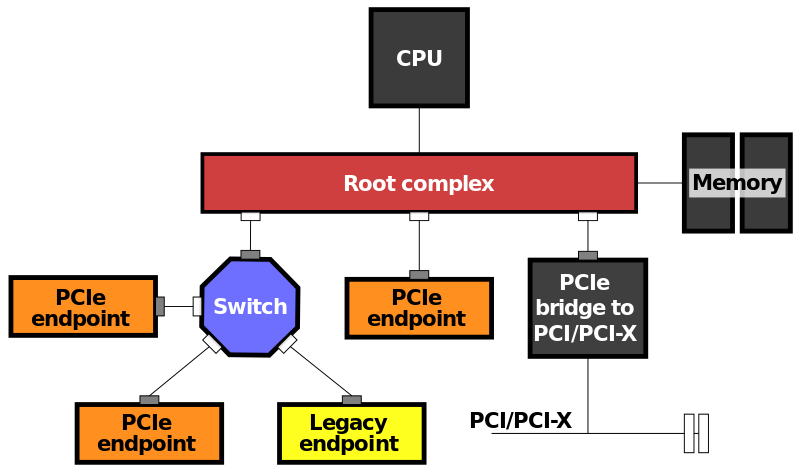 Every Switch, Bridge and Endpoint is a PCIe Device. All Devices have at least one Function, and each Function has its Configuration Space which is Device registers mapped to either I/O memory space (used mostly by PCI Devices) or to normal memory space. By writing or reading from this memory OS can exchange information with a Function. For example OS can check the vendor of a Device by checking the Vendor ID field in Configuration Space Header of this device function.

In the Configuration Space we can find most importantly 2 structures:

What PCIe capability actually is

It is nothing more than a predefined feature of the Device Function, a feature that is known to be possible to be implemented in every Function, but most of them are optional. Every capability has registers in a Device mapped to configuration space. Those registers are a kind of interface to the capability. Some are read only and contain information needed by the software, others are read/write and can be used to pass information to the Function.

This is one of the most important capability structure, it must be present in all PCIe Functions. It is a collection of various information about:

OS can manage the power environment of a Function directly by accessing registers corresponding to this capability. OS can set Device state to one of 4 states. Two of them (D0, D3) are mandatory and other 2 (D1, D2) can be optionally implemented. D0 state is a state where the Function is fully operational and uses full power, every next state (D1,D2,D3) uses lower power, but also takes more time to recover to D0.

PCI has pins to let the central interrupt controller know that it needs to be serviced. This improves efficiency of the CPU which does not need to check every Function periodically, but it also significantly increases the number of needed lines. In PCIe instead of additional lines special messages are used to signal interrupt. Message Signaled Interrupts (MSI) allow the Function to write a small amount of interrupt-describing data to a special memory-mapped I/O address. The interrupt controller then delivers the corresponding interrupt to a processor. Data and address to which they are being written are located in MSI capability structure.

All following capabilities are optional.

Extends MSI from 32 possible vectors to 2048 by placing a table containing addresses and messages of each vector in RAM instead of Device registers. Pointer to the table and its size is saved in the capability structure.

This capability extends power states by additional 32 states between D0 and D1.

Its goal is to allocate power for PCIe hot plug Devices that are added to the system during runtime. This ensures that the system can allocate the proper amount of power and cooling for these Devices.

It provides additional registers that give error handling software more information to work with in diagnosing and recovering from problems.

It adds buffers that act as queues for outgoing packets. This capability allows Device to assign one of 8 priorities to packets. Every priority has its own buffer. Packets from buffers with higher priorities are sent more frequently.

It adds the possibility to use cache inside Switches and the root complex to alleviate the need for RAM usage. The idea is similar to the idea of ​​adding cache to processors; adding a small amount of very fast memory to save soon needed data is a more efficient approach than saving this data in bigger and slower RAM.

It replaces the BAR registers from the header with bigger registers in this capability structure, allowing bigger memory space allocation for Functions.

The PCIe specification allows for peer-to-peer transactions. It is possible and even desirable in some cases for one PCIe Endpoint to send data directly to another Endpoint without having to go through the Root Complex. ACS provides a mechanism by which a Peer-to-Peer PCIe transaction can be forced to go up through the PCIe Root Complex. ACS can be thought of as a kind of gate-keeper - preventing unauthorized transactions from occurring.

It enables sending packets to more than one Endpoint eliminating the need for the host to write a unicast packet multiple times to each Endpoint which improves efficiency of the CPU.

PCIe Devices use registers mapped into memory space to allow the OS to know what Device’s feature set is. These registers are grouped into capabilities structures defined by PCI Special Interest Group in PCIe specification.
This blog post was only an introduction to PCIe capabilities, the idea is to describe some of them in detail in future posts.