Recently we were reached by person interested in running CoreOS on apu2. CoreOS is a very interesting system from security point of view. It was created to support containers and scalability out of the box. Unfortunately it requires firmware supporting GPT. At that point I was not sure if I can utilize GRUB GPT support on apu2, but this led to other questions:

Those questions were much more interesting to firmware developer, because of that we decided to triage coreboot UEFI payload on PC Engines apu2 platform. For interested ones in that topic I recommend to take look at video from coreboot conference 2016. All my modifications of edk2 for the article below can be found in 3mdeb edk2 fork For those interested in UEFI-aware OS booting this blog post can be useful, but I also plan to write something straightforward that can be used and read by APUx platform users.

NOTE: this blog post wait so long for publishing that coreboot community provided and improved support for tianocore payload. It can be chosen from menuconfig and adds some coreboot specific patches that improve overall support. Please use option:

Manual method still can be useful to try vanilla edk2 and hack with it.

On my Debian testing I had to explicitly change compilers to gcc-5 and g++-5:

Otherwise build fails. After that I was able to build UEFIPAYLOAD.fd:

Build result is located in Build/CorebootPayloadPkgIA32/DEBUG_GCC5/FV/UEFIPAYLOAD.fd. Following build and integration instructions I added build result as An ELF executable payload. 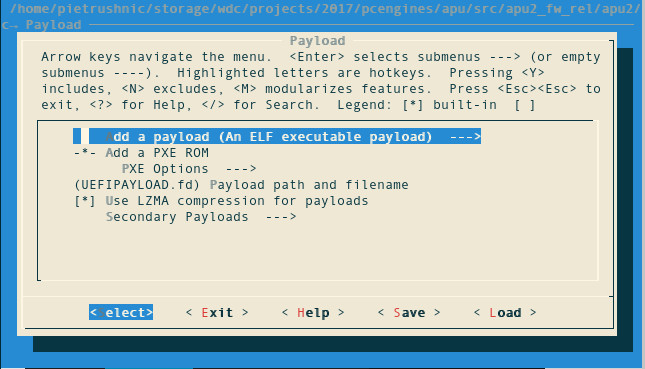 It is important to deselect secondary payloads like memtest86+ and sortbootorder to avoid compilation issues.

For all interested in EDK2 code development I strongly advise to follow Laszlo’s guide. In case of apu2 useful script may be:

Interestingly CbSupportDxe seems to not have problem with finding GUID HOB, which is right after asserting reservation. It also passes installation of ACPI and SMBIOS table. I just commented that reservation and moved forward to see what will happen.

Next problem happens during initialization of RTC:

Unfortunately Real Time Clock is required architecture protocol and cannot be omitted. First problem with this code was an incorrect state of Valid RAM and Time (VRT) bit in RTC Date Alarm register (aka Register D). By checking AMD Bios and Kernel Developer’s Guide (BKDG) I was not able to find issue with RTC. Reading all registers was done correctly and register layout seemed to be standardized for RTC devices. I faced one very strange situation after leaving apu2 for a night. First boot passed through above assert and finished booting much further (in BDS). This was very suspicious like timing or HW initialization issue. Final log looked like that:

In debug logs there was nothing suspicious. Apparently register D of RTC returned correct value in VRT register. Finally it turned out that VRT was incorrectly described in datasheet as read-only. Register D initialization function caused setting VRT bit to 0 what further led to Device Error assert. I fixed that problem by removing initialization from PcRtcInit.

One of other behaviors worth to note was unexpected coreboot reset after applying power:

Booting to UEFI Shell on apu2 I had “freeze” after:

First is gEfiShellEnvironment2Guid and second gEfiShellInterfaceGuid, so I decided to take a look where those GUIDs are used and hook there to see what may be wrong. After poking around I realized that those came from binary included in repository. What is included can be modified by changing SHELL_TYPE variable. When using BUILD_SHELL I see little bit different output:

Control is passed in BDS code by calling StartImage. For some reason I couldn’t print my logs to debug by printk. I verified that I’m in correct code by placing assert, code was interrupted in correct place but not serial log. Trying to change DebugLib and provide correct SerialIoLib led to reboot. I fixed that by removing DebugLib from libraries section in Ia32X64 DSC:

However this showed me hang in DoShellPrompt on function code:

Big kudos to Laszlo Ersek who is well known from creating and maintaining OVMF. He pointed me to code in ArmVirtPkg where workaround for my problem was implemented. I read through code from ArmVirtPkg/Library/PlatformBootManagerLib/PlatformBm.c and meant that I have to modify ConIn, ConOut and ErrOut variables. It was because those variables miss device path to UART device. ConIn, ConOut and ErrOut are global variables defined in UEFI spec. Those variables are available in boot time, runtime and are non volatile. This means that those variables are available during boot phase before firmware calls ExitBootServices and after that during system runtime. Those variables can be changed, but change takes effect after boot.

So in short those variables define where we can find input, output and std error device. As described in mailing thread serial port can be reached through SerialPortLib API and it worked for me during boot phase. Precisely what worked for me was BaseSerialPortLib16550.

I assume methods in this library are not available in runtime and that’s why switching to Shell caused no output. Second method is through EfiSimpleTextOutProtocol. Full explanation can be found in mentioned thread, but in short it is required to add device path of UART to mentioned global variables so those can be used. My understanding of stack is:

BaseSerialPortLib16550 works on I/O and MMIO level to initialize and provide read/write capability for 16550 compatible UART device. This lib is utilized by SerialDxe DXE driver. SerialDxe produce gEfiSerialIoProtocolGuid and gEfiDevicePathProtocolGuid. First abstracts any type of I/O device and provide communication capability for it. Second gives ability of provides information about generic path/location information of physical or logical device (more information in UEFI spec). gEfiSerialIoProtocolGuid is consumed by TerminalDxe UEFI driver, which is responsible for producing Simple Text Input and Output protocols on top of Serial IO protocol. Those protocols give API like ReadKeyStroke, WaitForKey, OutputString, ClearScreen, SetCursorPosition and other that help in handling input and output data. Those protocols then can be used by Shell application to provide interactive experience.

As I mentioned at beginning code is available on 3mdeb git repo. With it you can build coreboot.rom that boots to UEFI Shell. There are plenty things to do i.e. map and probably other commands do not work properly. Feel free to contribute.

Above steps gave me ability to enable UEFI payload on top of coreboot firmware. This configuration seems to heavily use AGESA, which is a very similar to Intel FSP being responsible for big part of hardware initialization as well as exposing artifacts for UEFI-aware payload, bootloader and operating system. This blog post can open possibilities to boot UEFI-aware OSes on PC Engines apu2 platform as well as give ability to research AGESA firmware more extensively. If you are interested in enabling UEFI-aware operating system on your platform that already support coreboot do not hesitate to contact us. If you have any other questions or comments post those below.